Has anyone else seen this site?

I think it needs some work (and they say it’s a work in progress), but it’s already pretty dope.

I find it particularly interesting because they’ve already done exactly what I was hoping to do one day, which was amass all the recording/playing/producing credits on every p-funk recording into one place, into a sort of database where it could all be played with, for curiosity’s sake.

For example, I often wonder, who are the most important p-funk members of all time, after the obvious George, Bootsy and Bernie? An easy way to begin answering that question would be to know who was featured on the greatest number of recordings, and in what capacities (songwriting>guitar>keyboard>producing>drums, or whatever your preference is), and perhaps just as importantly, on which recordings (the 70s stuff is more essential listening and way more critical to the p-funk legacy). And this site basically has all that information collected, for your perusal.

It’s ridiculously complete - too complete, even. Because Maceo, Bootsy, etc used to play with James Brown, his entire output is listed on the site, along with all the credits for his recordings. And all the credits for other artists who featured a p-funk member before. Even all the Beatles’ recordings are listed there, and I can’t quite tell why. Is it the Billy Preson connection, or something else?

I’ve sometimes wondered as well, with the great number of musicians who have gone through the p-funk family over the years, did the “right” 15 make it into the RNRHOF? I understand that only contributions before about 1982 really matter to the hall, as that was the collective’s critical and commercial peak. And I’m not saying that anyone got in undservedly. And I understand that they had to draw the line somewhere. But were there maybe a few others who should have made it in along with them? Maybe Mallia? Maceo? Mudbone? I’m still a relatively new fan but I’m absorbing a lot of material in a short time from websites, liner notes, etc. I may be mistaken, but it seems their names come up at least as often as Tiki Fulwood or Calvin Simon.

Really though. Some seriously interesting stuff you can do with this site. I don’t think the information is 100% complete, but it’s way more complete than I could do if you paid me and gave me 3 months to research.

Since George is the common thread to most of the major releases, I clicked on his entry. From there you’re able to look at every instance of another person collaborating with him on a song. Adding up playing and composing, the most frequent collaborators with George are:

So at first glance, it looks like the HOF selection committee did a really good job selecting the most prominent members, just based on their frequency of collaborating with George. The lowest on the list are Jerome, who placed 23rd, and Grady at 28th (and of course, who should expect the inductions to perfectly match the order on this list?)

On the other hand, Maceo, Fred and Mudbone, as I suspected, may be deserving of inclusion with the other 16. At 5th, 7th and 8th on a list where the rest of the top-12 made it, I think they’ve put in the time.

And if George is the king of p-funk, surely Bootsy is the crown prince. So it’s worth investigating who collaborated with him the most. Using the same formula as before: 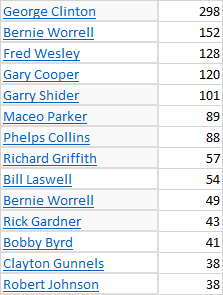 Now, this by no means is a definitive list of collaborations with only Bootsy’s career, because some of these would be counted in the first list, and this one. But right away you see Mudbone and Maceo near the top, as well as Fred Wesley (as suspected). If we’re pimping up underappreciated P-funk members, you can start with these three, I’d say.

I love these kind of stats!

Been browsing around on that site. Great database with a lot of info. A real clean and easy to use site. I wonder who made it?

As you mentioned, there’s also a lot of other material too with not so clear p-funk connections. I think that the site should benefit if they were removed, or at least if it was noted in what way they were connected to p-funk. Somebody not familiar with the p could get the impression that these acts (like Stevie Wonder, Elton John and so on) are part of p-funk. With that said, I still think it’s a great site with great potential. Hats off to the people who made it!

The content of the site along with the search (collaboration function) is really mind blowin’ … nice find! As y’all mentioned: an explaination why specific artists have an connection to the mob, would be great, but hey… funk on! \m/ \m/

btw. the sites domain is registered since 2013 and i never noticed it before…

It took a while for me to find it as well.

That’s actually a thing I been thinking about - how to promote a P related project (like a site). Content is of course king, but people also need to find it somehow and/or get to know about it. Not easy at all…

Y’all never ever heard of the Motherpage???

Go dig it out: http://mother.pfunkarchive.com/

pfunkportal.com has been down a while now. I hope it will be back soon. Anybody knows who’s behind that site?

I was wondering that too. Very sad if this is a permanent development.

The site is back up now! Sorry about the downtime, I honestly had no idea people were actually using the site, since I haven’t worked on it in years, so I had been procrastinating on fixing it. But it should be up for the foreseeable future, especially now that I know that it’s getting some use!

Excellent! Thanks for a great site @JKen13579 and welcome to the forum!

Thanks, that’s awesome. I’m happy to see we will be able to use it again. Since you’re here, I’ve gotta ask - what connection do the Beatles have to P-funk?

There are others too, like Chuck Berry, Muddy Waters, Ray Charles, Aretha and so on, and we can get to those, but I’m really wondering why the Beatles are in there.

@Seventieslord, you’re totally right that they’re unrelated. When I first started the site, I wanted to input recording credits for the P-Funk discography. After I went through those, I decided to move on to other artists whose recording and session credits were interesting, and generally only available in limited release or hard to find box sets or compilations rather than online. Eventually I got bored of the tediousness of adding them to the site, so I stopped working on it altogether, and never really updated it to reflect that there were other non-P-Funk artists on it.

Hopefully that answers your question, and sorry if it caused any confusion. Though I will say that in regards to the Beatles, Funkadelic did briefly coves “She Loves You” on Electric Spanking of War Babies, so there’s that.

Another Beatles connection is that Sgt. Pepper’s 7" that Tuff City released.

does anyone know what’s happened with p-funk portal? seems to have been down for several months now.

@JKen13579 any news? such a phenomenal resource, would love to see it up for exploring again

That’s where I got Baby Elephant from (currently on its way) and many others. Let’s hope it’s being re-vamped