@stonedar found a version of Paint the White House Black on Discogs that has no fewer than SEVEN other versions of the song that aren’t on any other releases: sorry to have missed this earlier. I’ll add these to the list. Also adding a few House Guests songs since I’ve stopped holding my breath waiting for those to come out on CD. 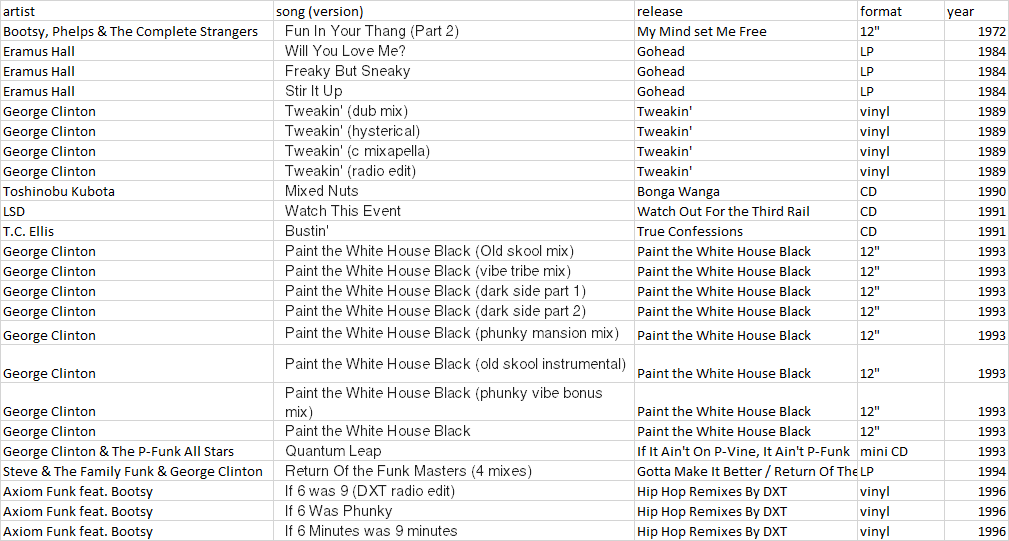 I don’t even have this one listed, because I only list things I think we have a realistic chance of ever obtaining… Paint the White House Black (Dark Side Mix Part 1) also showed up on one of the Martial Law singles.

Is it listed as the Dark Side mix on said single? I can’t find it on discogs, though that doesn’t mean there isn’t another version of the single that isn’t showing up there.

2 posts were split to a new topic: The Parliaments - You’re Not Hurting Him (You’re Hurting Me)

Last track on the B-side: whoops! I was looking at PTWHB singles. sorry about that. And thanks.

OK, pulled up those Original P Jump Up In The Air mixes and gave them a listen, and need to modify what I told you before. There’s only one TV mix, and it’s only on vinyl. The listing of a second TV mix is an error in both the digital release and on my 2 x 12" vinyl (which I remembered incorrectly). There’s a full throttle extended version of Jump Up In The Air with an additional rap by a woman (or kid?) that is not correctly labeled as such anywhere. So… If you have the digital single, here are the wrong titles followed by the correct titles and times:

So on the evolving vinyl-only list, the two tracks for Original P should be Jump Up In The Air TV Track and Neva Gonna Tell It Crazy Rave Remix. Westbound Remix TV Track does not exist. (Or if it does exist, I don’t know where it can be found.)

Got all that? There will be a test later…

I guarantee this is the most anyone has ever talked about a double 12" single full of alternate versions of hip-hop songs by a p-funk spinoff group.

My wheels grind slow, but they grind fine.

Anyone have this one? This would be a great one to share with the rest of us. Cheapest one on the net is still $100 with shipping. It’s never even been catalogued on discogs. Not on itunes, and only two tracks show up on youtube (I kinda like them!)


I only learned about this a few days ago. I like Funk For Your Ass a lot, so would like to hear this companion album. I

Which one? What are you referring to in this post?

(by the way, I can probably get the Godfather of Soul Train CD if I am patient and watchful enough. One just sold for 2 bucks on ebay only 3 days ago!) @Findagroov, where are you at, bro? I think that you can help us with at least a dozen of these songs. You’ve heard 'em, we haven’t. Where/how did you hear them? Fill us in!

I picked up that Paint The White House Black single with all the additional mixes. I’m not sure why they split the Dark Side Mix into two parts. It’s obvious that it was recorded/mixed as one long song. They’re both on the same side so it’s not like you have to flip the platter, and total length of both parts together isn’t excessive (relatively speaking). Anyway, part 1 fades out mid-lyric. Part 2 begins a few seconds earlier and fades in, reaching full volume at the same mid-lyric point where part 1 begins its fade out. So for fun I removed the part 1 fade out and the part 2 fade in, recreating a seamless full-length version.

Here are some other mixes I own on vinyl, that to the best of my knowledge are indeed vinyl only and rips don’t seem to be around online. Add 'em to the list!

I also have on vinyl most (all?) of the many mixes of the following (but I’m not sure if they are truly vinyl only, or their online availability; I haven’t searched):

Happy to share, just send a pm. And if any of you have the following and could share, that would be swell! Funkadelic - Get Off Your Ass And Jam / Red Hot Mama

Wow, Stonedar! You are still loaded with goodies aren’t you?

Also, clearly I am not dilligent enough at checking every single, uh, single on discogs for all the mixes because you have certainly identified a good number of them that have escaped my radar. Everything in your first list you should definitely rip because we don’t have any of those yet.

As for George’s 80s and 80s singles, most of the early ones only contained album tracks and the others ended up on Extended Pleasure… mostly. The ones that didn’t, had rips on youtube already. As far as I’m aware, if you picked up that 12" with all the mixes of PTWHB, we might have all George Clinton solo tracks (there’s still one from If It Ain’t On P-Vine, and a few collaboration tracks, but that’s it). Any other versions you’re wondering about, probably exist on CD, which means I have them in physical form, which means ripping them from vinyl won’t be necessary. Anything you’re after that is in that category, just ask and I shall share.

Thanks for bringing Bootsy’s 80s CD singles to my attention! Party on plastic is not especially rare or expensive, and it looks like the one promo version contains all the mixes that are on the vinyl versions, and a few more, too, so it’s a very worthy purchase for me. No need to rip that single. But 1st One to the Egg, please rip that one because it’s vinyl-only.

As for the early 80s PFAS stuff, from what I gather, all we are missing the edits of part 1 and part 2 on this: https://www.discogs.com/P-Funk-All-Stars-Hydraulic-Pump/release/6605045 , and the two shorter mixes from this: https://www.discogs.com/P-Funk-All-Stars-Pumpin-It-Up/release/11301809 . I took a good look at everything on discogs again just to be sure, and this is all I can find that’s outstanding.

the Instrumental version of Man’s Best Friend is on Youtube: https://www.youtube.com/watch?v=Woie60VTTUI

I didn’t include the songs from party on Plastic because I just bought the single.

The list does not include anything we’ve all agreed is literally impossible to acquire. 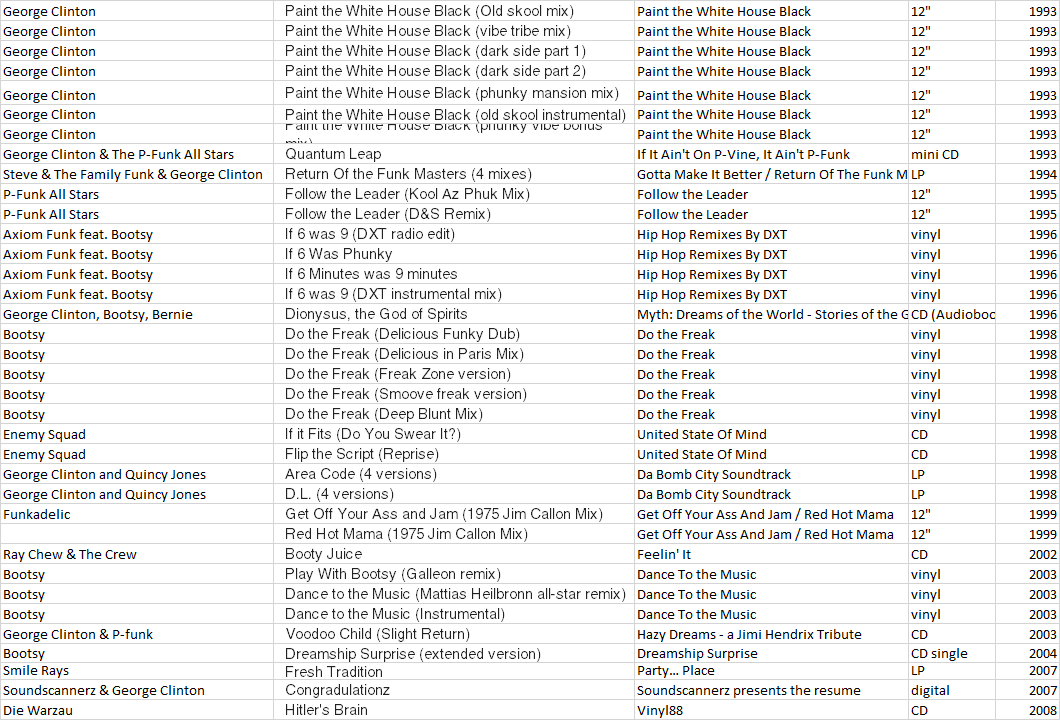