The re-issues of old boots keeps on coming. This time it’s the Live In Washington D.C. 1977, previous released as boots Funk Prophets (Chapter I) and Gett Higher. 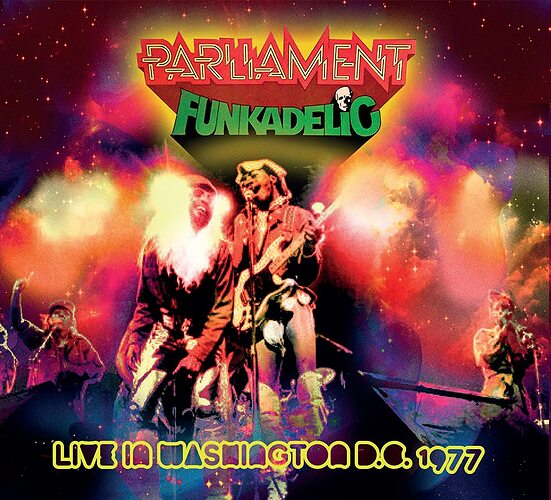 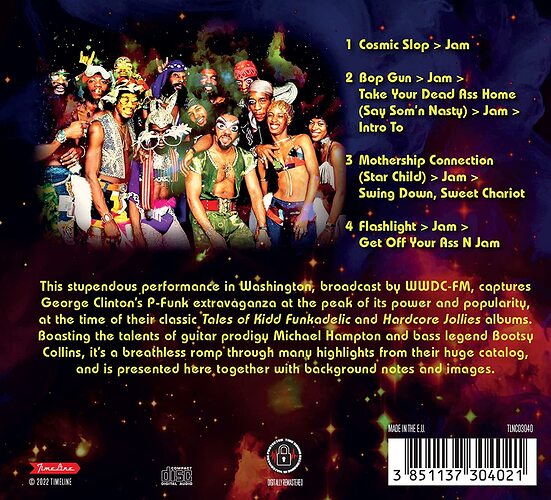 It was released a couple of months ago on the label Timeline, the same label as the last boot Denver 1976. It also got the same type of sound quality.

I need this CD in my life! How or where can I get this?

I got my copy from Amazon. Check there.

Yeah it keeps coming out. Bop Gun is outrageous, rolls on for upwards of half an hour I think. I don’t think the full version is on the video, but could be wrong.

. Is there a video of this DC show?

Saw that it’s also up on Spotify now (in Europe anyways).

Wait a minute. Is this just the Landover Feb 18 1978 show from the video but missing Funkentelechy??

Damn you’re right! That is the February 18 1978 show. It never struck me that it was the same show.

The video is in the full show video topic.

Damn. People are actually still paying for bootleg shit? After all these years no one should be paying for the shit unless it is officially released. This is not.

If anyone needs or wants any PFunk show let me know and I’ll make it available for free.

I hear what you’re saying. But I’m still a sucker for physical releases.

Although all these on purpose misdated releases are starting to get on my nerves.

Yeah its the same gig. But I believe Bop Gun is edited on the video, could be wrong. Aren’t these the same folks that put one out calling it Madison Square Garden? And it turned out to be some gig we’ve had for years. Least they could do is be truthful, accurate and tell you what it really is. Just like this one, labeled 1977. Maybe they are trying to avoid doing that for whatever reason, or it could be they really do think it was done in '77.
Only the Noze nose.

Yeah that release that they called Madison Square Garden was the Newberg/Newburgh session. It was on a different label, Rox Vox, but definitely the same folks.