I got tired of waiting on that “six panel double album compilation” with the Parliaments. So instead I went and got the Testifyin’ compilation from the 1990s. It’s great to have all the singles together on one record. 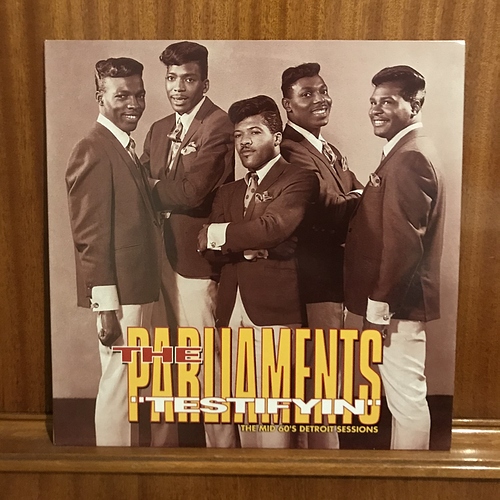 I already had the CD, but you know I had to get it on vinyl!

This is a nice slab of vinyl I am inspired to spin tonight.

Sorry to be a buzzkill again but “Goldmine” is an awful record label that have been putting out low quality funk 45 bootlegs for years. I doubt George or anyone received a penny from this release. I only ever played my copy to confirm all my worst suspicions. I really have to buy that cut from tapes “Goodies Are Gone” RSD release with 6 tracks before it gets too expensive. These two comps are an easy way to get some of tracks from that yucky comp in very high quality and at a decent price, That’s If you don’t want to splash out on the original 45’s!!!

Thanks for the tips! Will check them out.

I also have the ‘George Clinton - singles 1967-1971’ from 1988 which ain’t that great either, if I remember correctly. One of unofficial Bootlegs I do rate highly is this (German?) one from 1990 which sounds more than alright and has a great selection of tracks. Got that Vital Juices boot as well. It got some really nice rare tracks on it (several that I don’t have on any other record). But I feel it mixes to many different styles (from doo-wop to psychedelic). What I like with the Testifyin comp is that it’s focusing solely on the Parliaments, so I can put it on if I feel like playing some doo-wop.

But you’re probably right about the sound quality.

I remembered seeing the German? Comp previously mentioned on here before, You have to remember at the time of it’s release none of these tracks had been reissued and some of them still haven’t. The Parliaments tracks are not Doo-Wop they are Motown influenced “sixties soul” the kind of stuff that was also very popular here in the UK on the later “Northern Soul” scene as well, which part of the reason some of these earlier GC productions go for very big money. If you want to listen to some “Dilligent Doo-Wop” then you can always listen to German comp which contains Poor Willie/Party Boys from 1959. Saying all that the “Testify” UK comp on “connoisseur” from 1999 looks very interesting
as it contains unissued demos and some rare productions.

The Parliaments - Testify! - The Best Of The Early Years

Yeah you’re right, the Revilot years were more 60s soul. Don’t know why, but everytime I think of the Parliaments I just think of doo-wop.

I hadn’t noticed that the Connoisseur version of that comp had demo versions on it. Interesting!