Who's got funky kids?

I thought it would be nice to share stories about how we have passed the funk on to the next generation. In my case, my total number of offspring is one - my daughter Alex is currently 9 years old. She sings and plays keyboard and ukelele (she has a guitar and will soon start playing it as well)

She’s been exposed to music since birth, mainly because I have something playing nearly all the time that I’m not sleeping or watching TV. As someone with musical tastes that go all over the place, she’s had a really wide range of musical influences, but more than anything, the Beatles and Paul McCartney have stuck with her the most over the years. I took her to her first ever concert, a Sir Paul show in Winnipeg in September 2018, and she wowed surrounding audience members with her knowledge of all the songs and lyrics.

In my first p-funk phase, the one where I only went as deep as the hits, it was 2015 and she was 4, coming 5. Even back then, in that brief period, she really took to Give up the Funk and Flash Light, and would sing along with the choruses. But in the last 11 months, since I started buying up every P-funk album in existence, the power of The One has really taken over with her.

At various times I have caught her singing to herself:

We have a thing where I pull up the lyrics to a song at bedtime and play the song while she tries to sing along. We do it a few times a week. Over the past year I have introduced a lot of P-funk into that mix. She’s now able to sing pretty much all the major hits (just the ones with appropriate lyrics, for example, she doesn’t know the words to Cosmic Slop, thank goodness). Dr. Funkenstein, Flash Light, Aqua Boogie, Down Stroke, Get Low, and especially Standing on the Verge of Getting It On. Like for real, she’s so good at that one that she could sing it at karaoke, if there was such a thing.

At first she got very discouraged trying to follow along, because there’s so much back and forth, and so much vamping mixed in with the singing. It’s really difficult to match the pacing of the lyrics, but she enjoys the challenge and has been getting better and better. For me, it’s really emphasized one part of what made them so great and so unique. The placement of the vocals is so multi-layered and so all over the mix and you can get so caught up in the music that you don’t really stop to think about it, until you’re reading along while listening - and then you can really get blown away by just how much is being said.

After singing a song she often wants to know what it’s all about, so then we pull out @Findagroov’s book and read his interpretation of it.

I’ve shown her videos of live P-funk from their 1970s prime, as well as lots of Bernie live stuff. Anytime I’m listening to P-funk and Bernie’s playing is prominent, I point it out to her. I think I’ve taught her that he was probably the most important musician to the whole mix, with his woo effects beautifully augmenting the rest of it. Being that her primary instrument is the keyboard, she can really see the skill and improvisational creativity that he brought to the instrment, and it gives her something to strive for. There was lots that made P-funk unique, but I think specifically on the sound side of things, Bernie’s keyboard was what really made them unique and it’s a great lesson for her if she ever wants to be a part of a band.

…so yeah, my kid is pretty damn funky and it goes without saying that I’m really proud of that. I’d love to hear about yours!

My daughter’s music tastes run to the classical and orchestral. She doesn’t dislike the old man’s music, it’s just not her thing. But, back when How Late came out, she would always ask to hear Bounce 2 This and Su, Su, Su while I was driving her to preschool.

In 2017 she went to a show with me to finally see what I’ve been talking about all these years. She enjoyed it! Here we are: 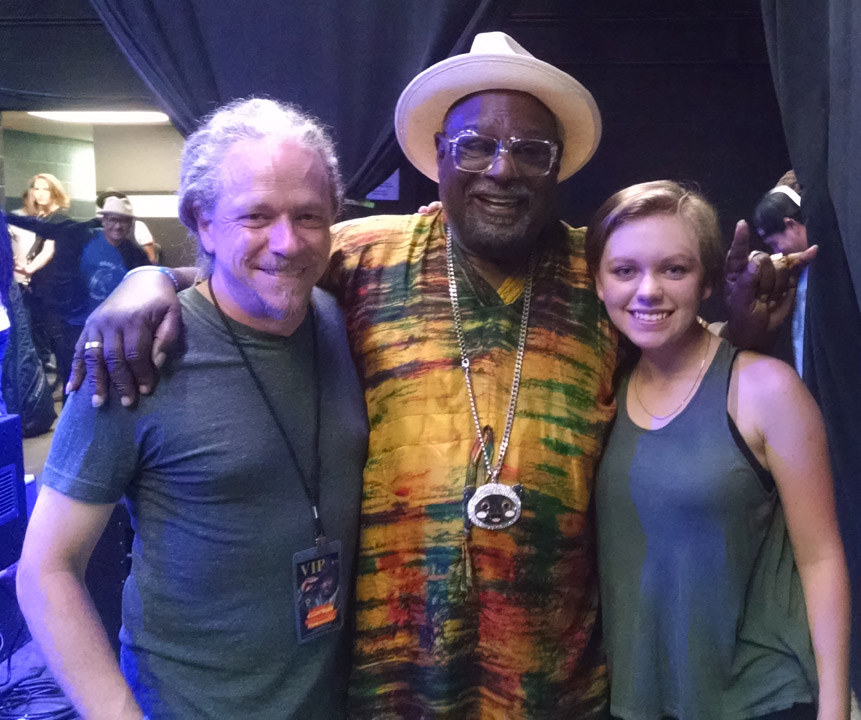 I have two kids, 10 and 8 years old. Despite my best efforts to get them into the P, they mostly like radio type of hits

. But I try to encourage all kind of music, so it’s all good.

The closest I got was around Shake the Gate. I had the CD in the car and all they wanted to listen to was Get Low - all the time. I tried to get some Ain’t That Funkin’ Kinda Hard and Radio Friendly in the mix, but they were like naaaaw we want to hear Get Low Get Low Get Low. So I had to put it back on.

Nice!! What is it about Get Low, anyway? That’s the one that Alex took to almost immediately. She was delighted to get the pun “when we go to Mars, got me feeling like Bruno”

Just five minutes ago I caught her randomly singing Snot 'N Booger, of all things! my goodness…

Just five minutes ago I caught her randomly singing Snot 'N Booger, of all things! my goodness…

That’s so funny. Did she do the rap?

Since my kids don’t have English as their first language, they don’t get all the lyrics yet. But my ten year old has English in school, so soon I can teach her some GC raps. I’ll be like, please repeat after me: There’s no partnership in the ownership of the Mothership.

Speaking of GC raps, we just gave our daughter “the talk” a few weeks ago and now the wife is telling me I’m not allowed to play “that song that says three dingalings and I ejaculate”