Hi everyone. Relatively new 38 year old fan. I have amassed in a short time, a massive collection of P-funk CDs and as a completist, I would like to get the board’s opinion on what may have missed my radar, and/or what would be the next-most relevant releases to branch out to.

In order to answer this question effectively, you’ll need to know my collecting habits:

Here’s what I have:

Basically, what makes you say, “wait, you have Lifestyles of the Roach and Famous and you don’t have XXXXXXXXXXX???”?

Hmmm. I may chime in with more later but right off the bat I’d say the Bootsy-produced Godmomma Here. Also Jimmy G & The Tackheads Federation of Tackheads. Red Hot Chilli Peppers Freaky Styley has a lot of P-Funkers on it.
Are you interested in any of the PFAS’s solo efforts of the early 90s/Y2K era: Andre Foxxe, Michael Hampton, etc.
Bootsy also produced an interesting record of 80’s R&B on a Cincy cat named Micowave. There is a Bernie vehicle called Space Cadets who put a record out in the early 80’s.
Clinton did a record on Otis Day & The Knights when he was over at MCA about '89 I think.

Well, right off the bat, you are missing the very first Parliament album, Osmium, which you can get either under the title First Thangs or Early Years on CD.

Also, while I see you have P-Funk All Stars’ Urban Dancefloor Guerillas, the CD reissue Hydraulic Funk has the extended versions of Generator Pop and Hydraulic Pump.

Now here’s a question: are you also interested in the Parliaments’ sixties period? While considerably harder to find, there are two different CD compilations credited to The Parliaments covering that period.

Also, seek out Police Doggy - credited to Parliament/Funkadelic/P-Funk All Stars.

Federation of Tackheads: I was aware of this, but thought it was too outside the orbit. Now that I take a closer look, it’s probably no further away than Lifestyles of the Roach and Famous, hey?

Freaky Styley: I don’t consider if P-funk really, but I have everything from that album that I’m interested in.

Andre Foxxe, Michael Hampton: probably too far out of the orbit… for now anyway.

Space Cadets: This is exactly the kind of recommendation I was looking for. I think this should get added to the collection.

Godmomma, Micowave, Otis Day & the Knights: Only produced by Bootsy/Clinton. But that can mean a lot of things. How strong is the influence on these?

Osmium: It’s right on the top of the list. You must’ve missed it.

Hydraulic Funk: You are absolutely right of course. I should have purchased this over UDG. I usually research very well before buying, and this time I made a mistake. Now I’m finding it hard to justify buying the same album a whole 2nd time for two tracks. But I’m aware of this now, anyway.

Parliaments: I don’t really call them P-funk, more like the roots (I really hear little no no similarity between them and the first couple parliament/funkadelic albums) but yes, I do have one of those compilations: Testifyin’. Which, from what I can tell, has every song that the other comp has, except for four. There are a few others that have never made it onto a CD, according to discogs.

Police Doggy - WOW! Thanks for that. I wasn’t going to dive into singles yet, if ever, and in my research I saw this and thought it was just a single from Dope Dogs with a couple remixes. On the contrary, Police Doggy is a standalone track and appears to be well worth adding.

Here are a few more things I’ve found, and hummed and hawed about but never bought. Your thoughts?

Instant Live: The State theater, Portland (I like this one better than the other Instant Live, and they’re from the same tour and I don’t need both. But it looks like tracks get outright cut off and restarted on another disc. That would suck. Can anyone confirm?

Bootsy live in Concert 1998 (CD-DVD) - anything official live from Bootsy I want. More or less just curious about the quality. Let’s say compared to the Oklahoma and Louisville discs.

Bootsy Fresh P remix collection - has a few remixes I don’t have on the European 2CD version of FOPU. Worth it?

Eddie Hazel: A night for Hendrix - this has the potential to be excellent, I’d say.

Clinton - greatest hits live. I expect it to be a crappy low budget comp. But does any of it overlap with other official live releases?

Clinton - Extended pleasure. Again, potentially awesome. Probably only a matter of time before I get this.

Clinton - Tamurinillis - Bad reviews on amazon. But apparently some unique material credited to Parliament? Or not? someone clarify.

Clinton - Music from the motion picture PCU. Has a few unique tracks from what I can tell.

Clinton - Bubble Gum Gangster. Looks like it has 4 remixes. I’ve never heard it. Worth it?

Parliament - the 12" collection and more. Probably only a matter of time till I buy.

Parliament - the best nonstop mix collection. I’m interested in your thoughts if you’ve heard this. Does it just force the starts and ends to fade into eachother or is it more creative than that? Is the meat of the songs any different?

Yes there was some kind of shenanigans going on between The Jimmy G album into the Inc Thang Band. When the single Body Jackin first appeared in Billboard magazine for review it was credited to “The Tackheads” or somn.
Up to the point of release it had been billed as the Jimmy G follow up and that he had changed labels to WB. Then when it got to the record store it was a whole new band.
I think the original concept was supposed to be done on Jimmy G but somn went down. Lige Curry once said GC came to him with the project.

There’s Quazar’s self-titled album which has Goins and Brailey. The band Drugs with Prescription For Mis-America. And Material with Bootsy and Bernie. Also Enemy Squad with United State Of Mind. Garrett Shider has 2 solo albums. There’s Philippè Wynne. Sly & Robbie - Rhythm Killers with Bootsy. Zillatron with Bootsy. These are all varying degrees of core-ness but hopefully it helps. Also not sure if all are on CD but most are

I would add the compilation Music For Your Mother - Funkadelic 45s. Includes some nice b-sides and great liner notes. 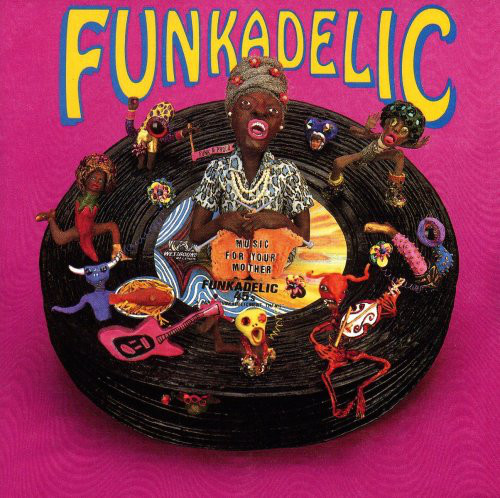 And also, if you start picking up singles you could get Get Yo Ass In The Water And Swim Like Me. 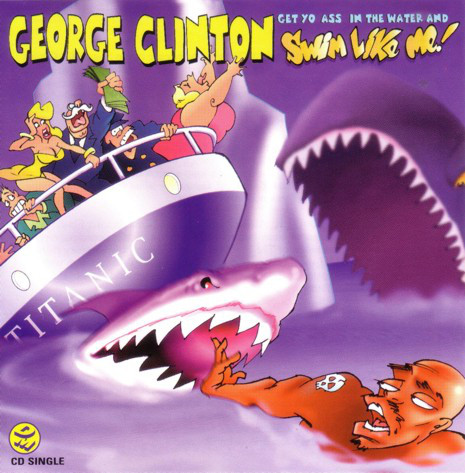 Thanks. I should update the list because it’s gotten a lot bigger.

As for MFYM, I see it’s readily available online so I’m not in a major hurry. Eventually I’m going to take a long look at what’s on those discs that’s not on all the Funkadelic rereleases with bonus tracks (which I have). From the looks of it, It does have some unique material, but I’m not convinced any of it is necessary. If I didn’t have all the bonus track albums, then definitely it would be.

Definitely have to get Get Yo Ass in the Water, didn’t realize until lately that it was a non-album track.

Aside from Get Yo Ass in the Water, Police Doggy, PCU and Walk the Dinosaur, are there any non-album singles that may have slipped my radar?

I’d definitely recommend The 12" Collection & More as it has some great cuts. It has IMO the best version of Testify I’ve heard, as well as a funky alternate version of Down Stroke with George interjections over top. It’s got a Parliament version of Oh, I and of course a bunch of extended mixes.

I recommend picking up some Zapp they are hella fire. Besides that it doesn’t sound like anyone is mentioning Mutiny or Quazar that much which both have hella fire music. Here’s also a dope handy link with alot of p-funk releases. also just discovered a Bootsy produced album called Godmoma here and it’s stupid fire almost better than brides and parlet.
Here’s a dope like with a ton of p-funk releases
http://mother.pfunkarchive.com/motherpage/list-albums.html

Yeah the motherpage is essential. Good thing the pfunkarchive saved it when it closed down from duke.edu/~tmc.

Welcome to the forum @WaltonWigout!

How much did all of this set you back?

Good question. I’ve now purchased 136 p-funk items on CD (the above list does not reflect all the directions my search has taken me in), and by my count, they have cost me CAD$2772 (about $2054 USD). The only item available at my local store, was the one that started the wave: World Wide Funk, by Bootsy. In every case, I paid the best possible price available at known internet sources: discogs, amazon, ebay. Out of print items were typically discogs, in print items, like the core funkadelic and parliament albums, were typically best priced on ebay.

I’m only after 9 more items at this time. Only one (Mico Wave: Cookin’ From the Inside Out) is particularly rare or expensive. I could just buy them all (aside from that one) right now, but I have instituted a rule: one item per week, every sunday. and not only p-funk is on my menu. So it’ll be months before I have every single thing I’m after.

I’m currently only after these 9:

Aside from p-funk albums where the prime creative force is one of the six most core members (George, Bootsy, Eddie, Bernie, Junie, Garry), there are quite a few others out there that have significant involvement from multiple p-funk members (even if 2nd generation members), to the point where they become practically essential listening.

For example, some that I have are:

I regret none of these purchases - they have been welcome additions.

Some that I want are:

Looking at the credits of most of these (particularly With Respect and IFAIP), they’re practically Parliament/Funkadelic releases guided by Amp and Foxxe instead of George.

Are there any other albums with this kind of configuration that should be on my radar?

Did you ever pick up that Enemy Squad United State? When it hit it came off like what I imagined Funkadelic should have sounded like at that time if they were to have put out a record, not By Way Of The Drum. And I told Gabe. He tried to get in The Dr’s earhole and the closest he came to really hooking up one of George’s tracks was Dogstar. And that was straight Funkadelic.

I got the vinyl on Micowave and a remixed 12" on the track Star Search & Misunderstood. Some quality jams on it. Good track with the Queen Of Funk on Instant Replay. He was over in Japan for a while in the early 2000’s. Had a video and went top 20 R&B.

As for Mr Fiddler and the Trey Lewd album. Both of these records were the most slept upon records of 1991 at black radio in America. These albums were loaded with hits that could have done some chart action. When Trey’s album came out I was expecting a bomb video and airplay however, he was nowhere to be found. As for the Amp record, Starvin’ Like Marvin could have really done it. Electra did not know what they had nor what to do with the act.

Yeah, Drop the Line really grew on me over the last few months. Lots of catchy stuff on there. Sounds a little dated, but if we’re pretending it’s 1991 right now, absolutely there should have been a handful of hit singles.

I still haven’t found United State. I don’t think it’s been available for sale on the internet in two and a half years. I’m ready to pounce the minute one becomes available, but who knows when that will be.

I have sampled With Respect and I like it, but still haven’t bought it. Trying to adhere to that “one album per week” rule I imposed upon myself in September. But it will be one of the next seven things I get.