The P in The Baltimore Afro-American 1978

Here’s an article from February 21, 1978 from the newspaper The Baltimore Afro-American. “George Clinton shines his flashlight” by Frederick I. Douglass.

P-Funk played at Capitol Center (Landover, MD) three days before this newspaper was published. That’s pretty close to Baltimore, maybe the interview was done there. Funkentelechy vs The Placebo Syndrome had been released a couple of months earlier (late 1977) and was pretty fresh, so George talks a lot about the album’s theme and how the different tracks connects to that story. One interesting thing he mentions is that it’s Starchild that’s singing “Wizard of Finance”. If I was a wizard of finance… Never got how that track fit into the album theme, so that was interesting to read. 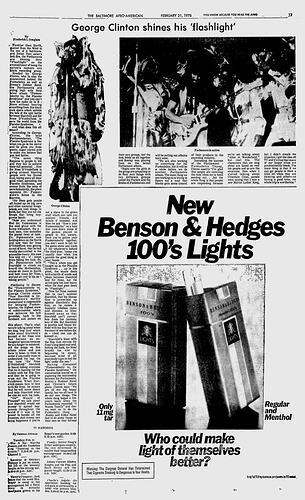 Great find I love this stuff. I still can’t figure out some of the lyrics to that tune.