The original Dope Dogs release on One Nation Records

You guys know that there’s 4 different versions of Dope Dogs? Discogs and the Motherpage discuss three versions, but there is an obscure 4th version, which I suspect is the actual original version. (And no, I’m not confusing it with the Dope Dog single. I have all 4 versions plus the single.)

What’s different about the fourth one?

Dope Dog here is the slow mix, also on the Japanese and US versions (European version has the fast mix). Police Doggy isn’t on any of the other releases.

The only problem is the date… This other disc is 1995, while the Japanese disc is 1994. My guess: George completed the album late in 1994, and quickly sub-licensed it to P-Vine in Japan and Hot Hands in Europe. P-Vine had greater resources than the boutique One Nation, and managed to get their edition out first, before the end of the year. Even so, I still maintain that this version on George’s One Nation label is the original, from which the other three releases were derived.

Good observations. Yeah, this version seems to be the original.

Does the cover only have the original Dope Dog drawing, or does it look more like the other releases? And is it credited to Parliament Funkadelic & The P-Funk Allstars or to George Clinton & P-Funk Allstars as the later ones?

If you have the possibility to upload a photo, I would love to see it.

Cover and disc credit Parliament Funkadelic P-Funk All Stars, but spine says only P. Funk All Stars. Cover art is the same as the other editions (there are subtle differences between all 4). The original Dope Dog drawing is on the actual disc itself, not the cover; sorry if that wasn’t clear. I’m at work now (but not working, it seems, as I am posting here

). I’ll upload pictures of the cover and disc when I get home tonight.

Yes, that is my copy!

Hey @Crawdad, you are only the second other person I know who also has this edition! Distribution must have been extremely limited. 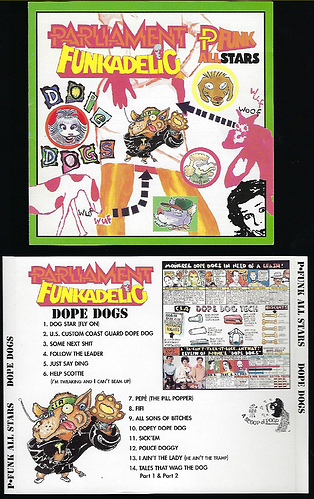 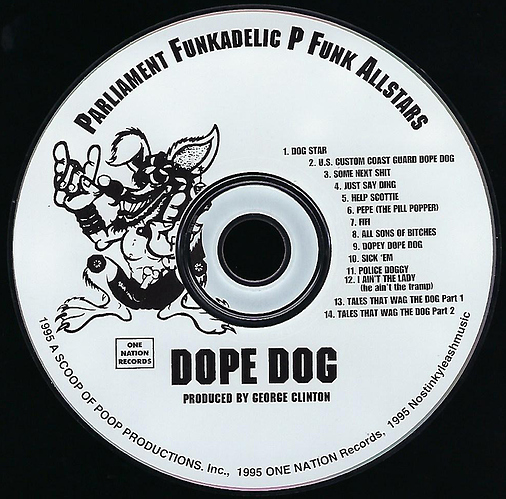 Haha, can’t believe I’m just noticing this now, after having this disc all these years, but on the disc itself it says Dope Dog (singular) instead of Dope Dogs!

I lived in the Flint Mi. area at the time. Yes that Flint Mi.

Nice! Is Tales That Wag the Dog Part 2 actually present or is it like the other versions?

Nah, same old same old. There may be two parts to the song, but they always are together as one track.

Thanks for uploading the images!

I was surprised that the disc of this version looks so alike the 12" of Dope Dog! 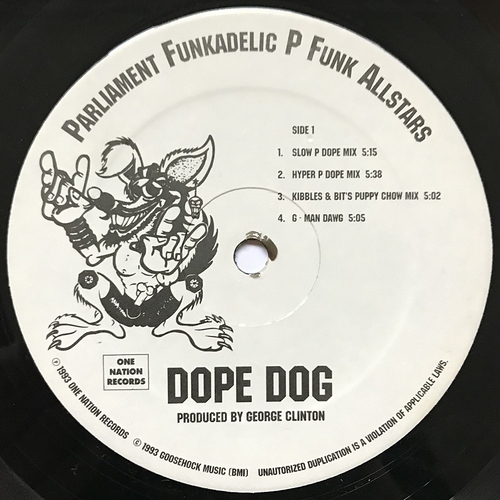 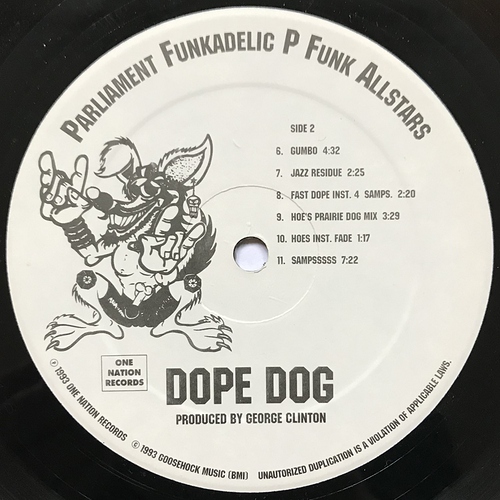 I also noticed that the tracklist on the cover and on the disc differs. Follow The Leader isn’t printed on the disc, but it it still included? Maybe they added it at the last minute and forgot to change the text…

Regarding One Nation Records. Found the book Extended Play: Sounding Off from John Cage to Dr. Funkenstein by John Corbett and it includes an interview with GC where he mentions that label briefly. The book is from 94, but I’m pretty sure the interview is from 93. This is what he said:

It’s called “U.S. Customs Dope Dogs.” That’ll be out pretty soon, too. That’s on One Nation Records, our own label. …

Follow The Leader is on the disc. Sharp eye noticing it isn’t listed there, that’s now two typos I never noticed before. Well, I don’t usually spend a lot of time studying discs, they’re either in the case or in the player, and I’ll be looking at the cover or booklet.

I was able to add this to my pfunk vinyls collection. It came from France. 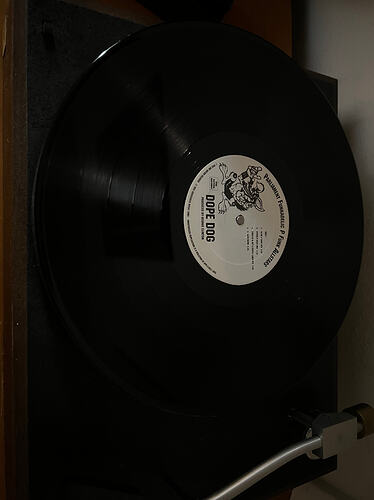 Nice find! That 12" is great. Welcome to the forum @PFunkBikeKlunk!

Oh God this is depressing

I had the Japanese and US versions and never even realized there was a European version, let alone that 4th one. Neither can be found on Soulseek right now (though they may pop-up later, depending on who’s connected). Any good soul willing to share their copies of these 2? Thx

I have the the OG US one discussed here that I can share tomorrow. I also have the US re-release. I would also love a copy of the Japanese and European/UK copies, I don’t have either of them. I’ll try to get the One Nation Records version out tomorrow!

@nowhereisaplace Thanks a lot for the One Nation version link. It’s actually listed on Discogs but strangely enough without a year, but the scans show 1995 so I assume that’s when it came out, not sure why the year wasn’t listed: https://www.discogs.com/fr/release/15976706-Parliament-Funkadelic-P-Funk-All-Stars-Presents-Dope-Dogs

Here’s my rip of the original Japanese release: https://we.tl/t-7XYNViqh7J

Funnily enough I bought it in Europe in mid-1995, never knowing there was an alternate EU release. Hopefully someone can share that one.