Are the live tracks on this release on anything that has ever been released on CD? Have they turned up on YouTube? I think the answer to both questions is no but somebody who has the actual LP may be able to confirm.

I have the live from Houston DVD but these tracks don’t appear on it in these combinations.

This ‘rare only viny’ thread was kinda pedantic but now it’s getting dunno!!!
I got the vhs first when it was released, the vinyl second, then the cassette and later the dvd… you are obviously not talking about the GC singles tracks. And all the live track/releases feature the same tracks from The same concert just badly edited Versions on everything except the dvd which is mixed 5:1 stereo

I still have that VHS, but no VHS player

At the time this was the only available footage of Parliament/Funkadelic playing live and it was a Mind Blowing thing to own. 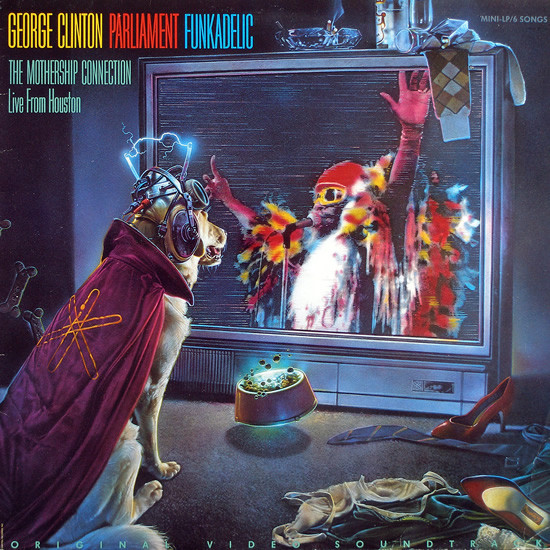 Yeah it is nice cover art… Great gig, some really great moments. GC shouting “Sly! Sly!” But Sly doesn’t appear, was probably stuck in a corner somewhere smoking crack!!! A good few years back I managed to rip the 5:1 dvd audio and burn a stero cd-r and mini disc for ease- ability!?!

Oh yes I remember this appearing in the mid 80’s. The vinyl came out first. Then we waited around for the VHS. When it finally came out we were chomping at the bit. I remember being confused about how long it was. Then in the early 90’s a couple of rough boots of the whole gig started to appear. AFAIK and remember the VHS was released first… if you look at the discogs listing there is only one listing for the video a UK release a year before the vinyl.

Interesting. My memory banks may be failing. I know we were damned excited about both the vinyl and the VHS. I recall seeing the vinyl at the store first. I was in college and had absolutely no money, but somehow the record store or somebody was able to order the video for me.