While looking for what tracks of the Da Bomb album by Space Cadets were on youtube, I found a few videos posted by Jesse Rae containing music from a supposed new Space Cadets album.

He’s posted stuff about it as recently as 2 months ago. Anybody have any idea as to when this might come out?

Wow! I know nothing about it, but that would be pretty sweet. I wonder if they’ll use some keyboard parts Bernie laid down while he was still around. It wouldn’t be the same without him. By the way, I own the Space Cadets album on CD, so if you want the tracks, just ask.

I sure hope they use Bernie’s stuff. I can’t imagine they wouldn’t. I actually decided to go ahead and grab the cd myself, thanks though. I really digg the tracks I found on youtube

Great find! Nairobi Sailcat seems to be involved, so that’s good. Would also be nice if Kevin Goins is on it.

Haha I think it was a recording of a recording. I don’t think I’d say Jesse is the most tech saavy person I’ve seen lol

Even better! Did you get it on Discogs or somewhere else? Last I recall, all the CD copies left after I bought mine were pretty pricey.

Yeah I got it on discogs. It was somewhere between $25-30 including shipping.

Nairobi Sailcat had another project after The Space Cadets by the name of Bizerk. I Don’t Think It was Released.

forgot about this for a while. thought I’d shoot Jesse a tweet. here’s the exchange. 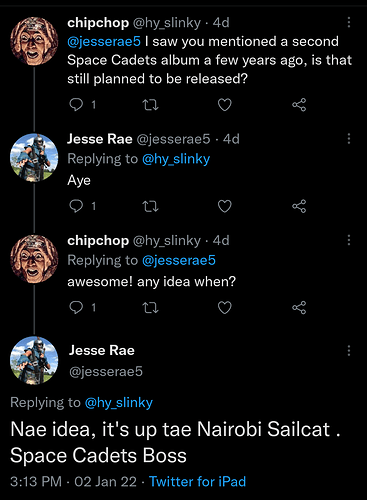