Reissue of Ain't That Funkin' Kind Of Hard 12”

The Louie Vega remix 12” will get a re-release on purple vinyl. Been thinking of getting the original one, but maybe I’ll get this one instead. 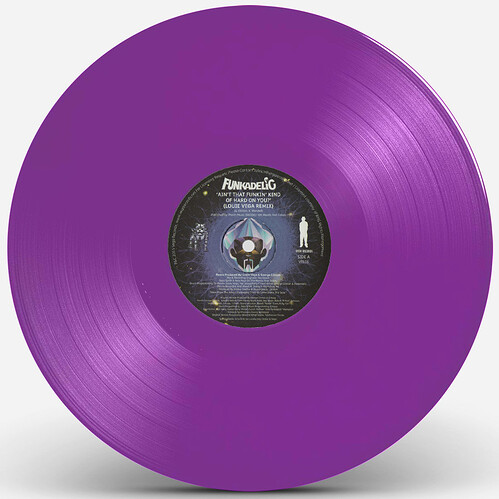 There’s two house remixes on this 12” (Louie Vega remix and Vega Trumpet dub), both appear on that 9 track digital release.

Yes this is the version I like to see Greg blow his sax over onstage. I made a 20 some minute mega mix by editing the two sides together.

Sounds nice. Did you mix them together so you don’t hear when the new track start, or did you just cut and paste them?

At first I felt that the Vega mix was to fast, but after I got this 12” I started to like it more and more. Now I like it a lot! I also noticed that the track called Louie Vega remix on the 12” is actually the Louie Vega mix on spotify…

Because you said the plate is too fast, I was thinking about playing that 12" sucka at 33RPM but then I checked your link and recognized it isn’t a 45RPM record…

Anyway I just checked that the reissue is OUT OF STOCK at Juno Records… at discogs the difference is 10€, original costs about 23€ and the reissue 12€, just in case if you’re still thinking about the one or the other… https://www.discogs.com/de/master/2214847-Funkadelic-Aint-That-Funkin-Kind-Of-Hard-On-You

Cut n paste. I took the first one almost to the end then found a nice edit beat point. Then put the trumpet version on. Did the same thing towards the end and tacked on the last part of the side A.

Speaking of that 9 track digital release - I remember downloading that a couple years ago and I deleted track 7 because it was an apparent duplicate of track 4. Can anyone confirm they found the same thing?

I can’t go back and check because apparently my apple account is locked for security reasons (like it is every single time I try to open itunes), only difference being this time the password reset page also gives me errors and won’t work.

I don’t have itunes, but listened to them on spotify and I found differences with all tracks. Though some tracks are pretty similar.

It’s 4 and 6 on that list that I thought were the same tracks. Where were the differences you heard?

Yeah track 4 and 6 are pretty similar, but track 4 has Kendricks rap around 3:20.

Because you said the plate is too fast, I was thinking about playing that 12" sucka at 33RPM but then I checked your link and recognized it isn’t a 45RPM record…

That’s actually a great idea for a topic. “What track still sounds good (or maybe even better) at the wrong speed?”. Now I feel like getting a stack of random records to check if I can find some hidden treasures.