Rat's Nest Band - The Night Before

As you may or may not be aware, 3 songs by P-Funk appeared in the 1988 movie “The Night Before”, where they played in the Rat’s Nest Bar as the Rat’s Nest Band. Anyways, there was never any soundtrack released for the movie and they supposedly lost the masters. So I decided, why not try to funkenstein these together, if you will, and try to create actual tracks out of the portions of each song found in the movie, so I did. Some turned out better than others, but here’s the link to the youtube playlist I uploaded them into. If you want a link to download them, let me know.

Great work! I knew they were in that movie, but I have never seen it. Gotta track it down!

I always thought these were the funkiest tracks they did in the late 80’s. Shame they didn’t garner an official release.

Wow! I missed this back when it was posted originally. Solid work!

I bought a photograph recently from Morrison Hotel gallery in Los Angeles of George and Bootsy. The gallery didn’t know where it was from but they asked the photographer who said it was taken in LA on a film set they thought around 1986. Turns out it was from this movie. It is streaming now on HBO Max if interested in seeing it. Attached is the photograph. 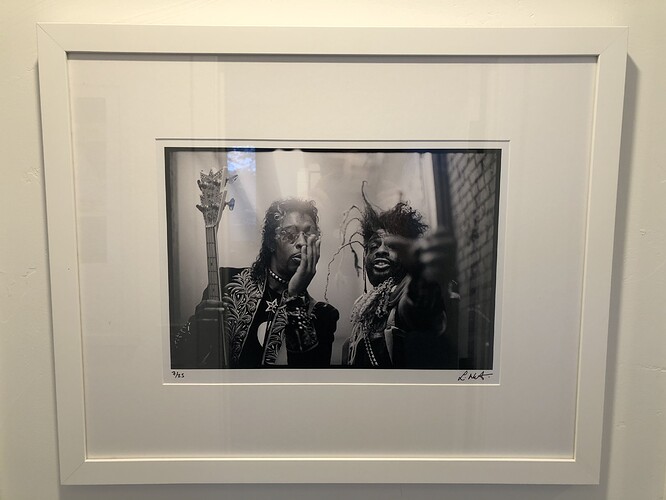 Funktastic. There are alot of other pics from that same shoot. I was laying up in the house one morning way back then just waking up when “The Night Before” came on the TV. I was way over in the unenjoyment line. I had no idea of what was going on but like Spiderman, I seem to get this “funk sense” that tingles a bit when the P is near. Totally serious. I can’t tell you how many times its gone off.
Well, I was feeling something and it told me to take a chance on this bomb, and watch it. Imagine my elation when I saw what the “sense” was telling me. At the time this was totally out of left field. There had been no press on it at all.