What about the Funkadelic - Sugar Shack, Boston, live in - 1974 ?
Is there any video of it ? A picture of it shows George Clinton getting out of a coffin. Must have been great moment.

All great questions. Wish I had answers to them.

Are you talking about this picture? I heard it was from February 13, 1975 at Radio City Music Hall.

I believe this Radio City gig is the origin of the famous Let’s Take It To The Stage photo that 'Droski used for the inner sleeve artwork from that LP. I recall some NYC press that had a less than favorable review of the gig. Graham Central Station was on the bill. A couple more supporting acts were there too. Rufus, maybe the Ohio Players I think. 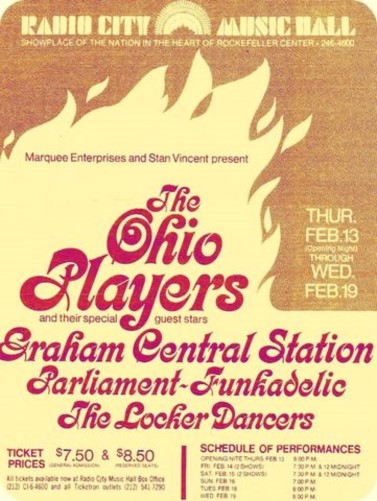 I’ve read that review you’re talking about, they were not impressed at all.

I also found an article/review in the Village Voice from February 24, 1975. Progressive Soul: Where Were You? by Vernon Gibbs. This is what they said about the p:

Funkadelic opened with the rabid squeal of their classic “Maggot Brain,” a ghost organ kicked into a moaning guitar solo, during which George Clinton emerged from a coffin dressed in a cape and a fencing mask. The Parliaments joined the act for other classics: “Goose,” “I Call My Baby Pussy,” and “Red Hot Mama,” Funkadelic-Parliament is the bizarro group, the group that taught Alice Cooper their act.

Damn, to see GC emerge from a coffin… “the bizarro group”

. Here’s the page from the newspaper. 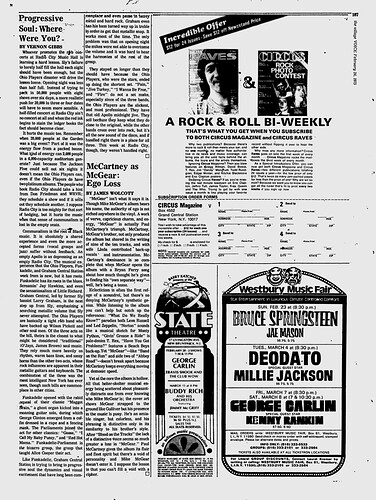 Hi, ok thanks for the information. Love the way George is dressed on the stage.

Oh wow, I never saw the Vernon Gibbs piece. Thanks a gadzillion for that one!