I can’t help but think of the speaker-headed henchman of Sir Nose D’Voidoffunk, Pignose from the “Gloryhallastoopid” album story. Aren’t the UnFunkables supposed to hate music and dancing? That would conflict entirely with Pignose’s motif, unless he blasts disco out of his speaker-snout given disco has been named as the basis for the placebo syndrome (aka fake funk).

Yeah Pignose looks kinda like a speaker. Never occurred to me, but think you’re right. Been looking at the artwork a little closer and it looks like he has on/off switches…

Sir Nose and The Unfunkables 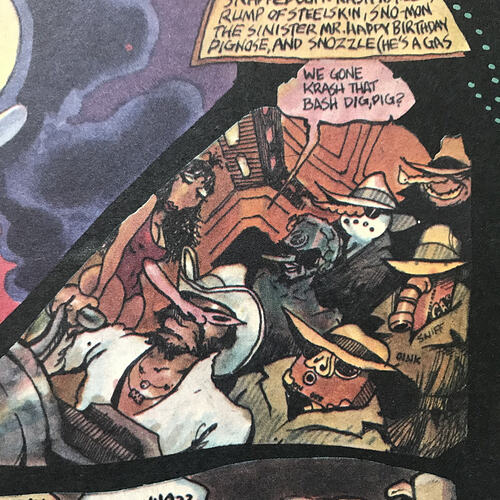 It’s kind of obvious. His name is literally a reference to Pignose amps.
Side note but can I have full page scans of each page of the Gloryhallastoopid comic? I’ve been searching online and all I got it low quality images and the most high quality ones are only snippets of the comics.

Ahh didn’t know about that amp. Will scan it when I get the time. I’ll let you know when it’s done!