Does anybody have this boot? I’m wondering if it’s the same show as Live At The Beverly Theater?

Several dates were recorded that year. Like the one below. So it could be any of them, but probably it’s just the same as the Beverly Theater release.

Yes it is the same gig that came out of the Beverly Theatre 3 night stand at '83. However, this one contains Standing On The Verge and smoldering version of Loopzilla (Blackbyrd goes off). Worth getting for that alone in my book.

Excellent. Then I will get it!

Is it another night than the Beverly Theater release, or is the tracks taken from different nights? Would have been cool if it included Body Slam.

The last track on all three versions of the 4-disc live set is Loopzilla (called “Lifted”). It’s credited as being from 1981, but perhaps that’s a typo and it’s from this boot?

I have to back to the 4 disc sets. I don’t think its the same version. My recollection is on the 4 disc live set, doesn’t it fade in already in progress right at Byrd’s solo?

Yeah, fade-in at start of solo, so maybe an edit of boot track?

Gotta be a typo. That strikes me as being somewhere from the 83 tour. Does it say the venue? I have not looked at the 4 disc set in a while. I have heard them incorporate some arrangements of Loopzilla during the Pumpin It Up medley they were doing in the 90’s with Skeet but not the whole song like that.

There is another one that looks just like this one only it is from 1981. I think Dayton but my memory fails me.

Yes, that one is apparently from Dayton. It’s on my want-list 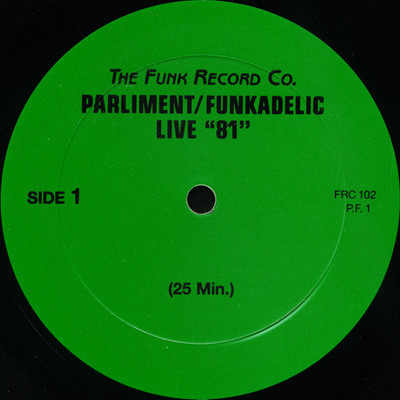 Yes that is it. Someone burned it to a disc for me years ago. There was an old radio show in the early 80’s called Budweiser Concert of the Month or somn. They featured a gig from the 81 tour but I can’t remember if it was this from Ohio or another one from St Louis. I was at my grandmother’s house when it came on and was trying to tape it.

So I finally got this boot. It got “Loopzilla” and “Standing On The Verge/Good To Your Earhole” as @OooBooBeeDoop mentioned.

First two tracks (“P Funk” and “Do That Stuff”) are missing, so it starts directly with “Cosmic Slop”. And from what I can tell the medley, “Give Up The Funk”, “Knee Deep”, “Atomic Dog” and “Flash Light” are the same as on the official record. I’m also pretty sure that “One Nation” is from the same show, but start and end time differ some. But “Maggot Brain” is different version! Probably from one of the other nights.

In order to try to make it easier to differentiate between them I made this table.

Given that this bootleg includes “Standing On The Verge” and “Loopzilla”, I’m pretty sure that this is the original radio broadcast. My copy was unfortunately pretty beat up, especially on “Maggot Brain”. But still a great boot and there’s still copies available on discogs.

For completeness, here’s what I got from the runout. It got “L-33389” etched in, which tells us that the stampers were probably made by the California based Greg Lee Processing. I compared with other records with roughly the same number (33389) and they where all made in 1989. So this boot is most probably also from 1989. The official record was released in 1990, so I suppose that makes sense that it was released around the same time.

Yeah, fade-in at start of solo, so maybe an edit of boot track?

It’s not the same version, but definitely from that tour. That track/solo can also be heard on the Washington show (in the first post) around 1:10:00.

Wow I didn’t know Maggot Brain was different. I’m gonna have to pull this out.