I hope somebody got their sunglasses, because I don’t know what I’m lookin’ at. I was wondering about a certain “The Enemy Squad Presents Ultra Unit - The Angel Dust Theory” as well as “Frogg by Froggadelic”. I can’t find a Discogs entry for them or really anything online, for that matter. Only a listing on the infamous THEFUNKSTORE.COM! for Angel Dust Theory. And on https://en.m.wikipedia.org/wiki/List_of_P-Funk_projects . But yeah, I was wondering if anybody knew anything about these and/or any other obscure P I should be listening too.

I bought The Angel Dust Theory from The Funk Store about 6 years ago.
Cut to some years later when Gabe Gonzalez learned I had a copy, he wanted to buy it from me for 80 $.
Although more than what I bought it for, it will remain in my collection.
Been a while since I listened to it though, but remember it as a good funky album. 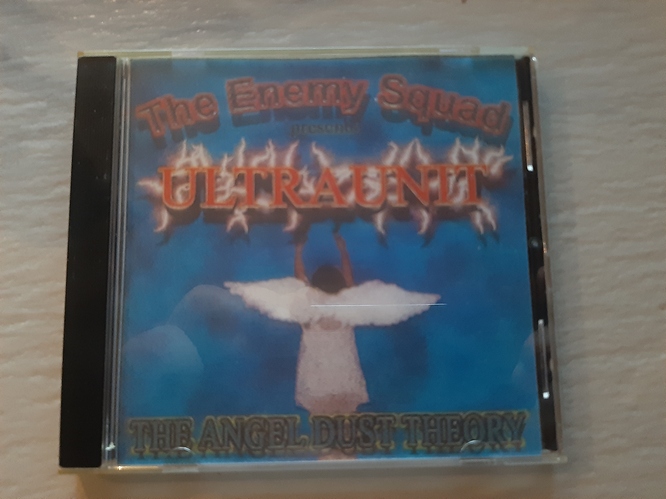 Ah yes the Angel Dust Theory. Gabe did this over a period of years on the road. He kept a portable studio with him and would get kibbles and bits from folks like Dawn and The Kidd Funkadelic to contribute to what became the project.
Really unique sound and vibe on it.
Froggadelic is a rapper out of Detroit with a strong P vibe. He was gigging with PFAS all through the mid 90’s and contributed to a couple of tracks most notably the Dope Dogs album. I got an update on him a few years ago from a friend of mine who used to stay in contact with him. I honestly can’t rwmember what he was up to.
Hope this helps.

Wow! That’s some steep P! Interesting. Is The Funk Store actually a still a functional marketplace? Everything I’ve seen on there (albeit basically just obscure P) has been out of stock seemingly indefinitely.

Nice stuff! I don’t have any of those records, but you can listen to Froggadelic on youtube.

Frogg (or Derrick Rossen, or is it Rosson…) also appeared on TAPOAFOM. Found a short interview with him (although he only mentions pfunk).

Apparently he also has his one channel at youtube.

Wow! That’s some steep P! Interesting. Is The Funk Store actually a still a functional marketplace? Everything I’ve seen on there (albeit basically just obscure P) has been out of stock seemingly indefinitely.

Yeah, that is a good question. The style of the page feels like it’s from 2000 or something

. But they have Medicaid Fraud Dogg, so maybe it is functional. 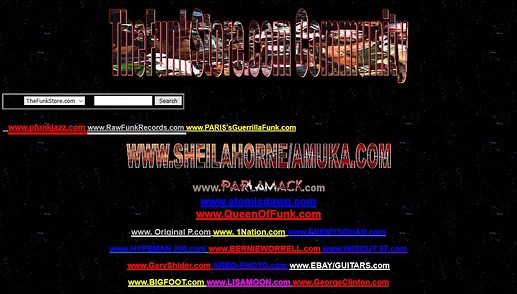 I recently found a few of the tracks of Angel Dust Theory on youtube and I really dug it. Does anybody happen to have the album that wouldn’t mind dropping me a digital copy? I’d buy a copy myself but I literally can’t even find a listing for one, and I’m sure if I did it’d be about a million dollars

I’ll take it too!

Is the artist Enemy Squad or is it Ultraunit and just presented by Enemy Squad?

In any case, this needs to be on discogs. @MotherFunkin, if you add stuff to the site, I recommend you get this on there. If not, just send complete pics to @silentboatman and I, and we’ll do the work. (technically we are supposed to have a physical copy in our hands to do it, but it’s just as well in this case).

Ultraunit is a concept record. It’s not Enemy Squad like the first one was. This one is more of a collaborative effort. Think of Enemy Sqaud as Parliament and Ultraunit as P-Funk AllStars.
By the woo, Gabe host’s a “Gonzilla Radio Yo!” on Wednesday night at 10 at the pfunkradio.com. He drops all kinds of stuff into a swirling mix of stankifried fonk.

P lated addition to this thread, but i’ve recently come by a CDr of “A Negative Nuisance” by Gabe Undisco Kidd Gonzalez from 2011, which on a cursory listen has some interesting tracks on it, including a version of Maggot Brain and a a 9.52 track with treylewd called “We Won’t Go Away” - track listing & cover 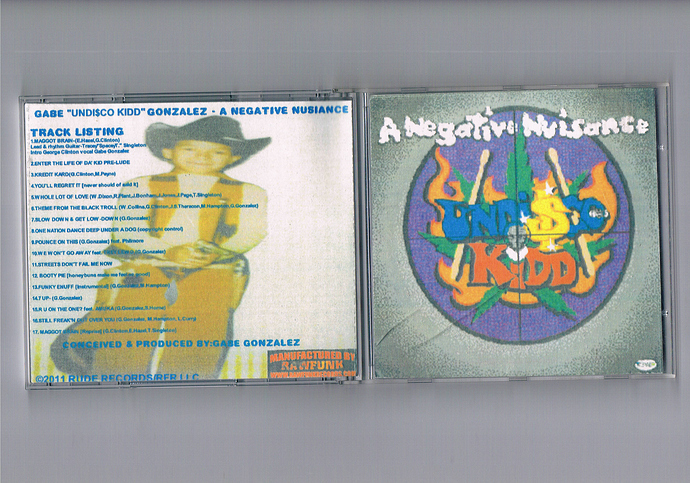 It’s a stanky funk record from Gabe. The mix on it not as crisp as I recall. I think he’s got a reimagination of Clip’s “Kredit Kard” from The Dr’s Cinderella Theory on there too.

Does anybody happen to have the album that wouldn’t mind dropping me a digital copy? I’d buy a copy myself but I literally can’t even find a listing for one, and I’m sure if I did it’d be about a million dollars

but any chance somebody could help me out with this?

Found it! I’ll drop you a message later today.

Of course! I’ll message you.

Hi ,
I’d also be much obliged if you can send me a copy. Thx in advance.