The forum in Kentish Town I think (or maybe the grand in Clapham?) - back when he was touring with Fred and Pee Wee - those were some fantastic gigs!

Funky greetings everyone. My name is Steffen and I am 44 years old.

My artistname is Steffen MotherFunkin.
If You hear P Funk Radio from time to time, You will hear the mash ups and remixes I have made in collaboration with Danny Bedrosian, Lige Curry, Kim Manning, OctavePussy, C.L.O.N.E a.o.

My P Funk journey began just like with Spacefunk with Hip Hop. I also gravitated more to the tracks where P. Funk was sampled without knowing full well what P. Funk was at the time, other than the credits of samples You could read from the covers to the various Hip Hop albums.

Met a friend in the early 90s that just had begun collecting P. Funk, and when visiting him it was awesome to hear the tracks that was sampled from. That’s how it began slowly.
What won me over completely and started collecting P. Funk was an evening at my friend’s place after smoking a big ass joint and listening to Zapp !!!. When we got to I Can Make You Dance I was completely won over, and has collected th P in all its various forms.

Like many of You I was also in the One Nation Board Room, but can’t remember what I was called in there back then.

One of my proudest moments has to be working with Danny Bedrosian. After he had heard some of my mash ups, he asked if I would do a couple of those of his music. That was back in 2012. Jump forward to 2016 where Danny released a whole album of mash ups and remixes I had done for him.
It consists of the music Danny has done himself and some of the other artists that were released on Dannys Bozfonk Moosick.label.
The album has only been released digitally and can be bought at various webpages like CDBABY.COM and Amazon to name a few. Just search for Danny Bedrosian and MotherFunkin

I’ve been following the forum for quite a while so I thought I’d come on board. I’m a knee deep P-Funkateer in my fifties, based in New Jersey. I’m a web developer, word game and puzzle enthusiast, and budding Kindle author. I love classic soul, funk, R&B, old school hip hop, jazz, house, acid jazz, some reggae, and gospel. However, my friends and loved ones will quickly tell you how deep I am into the P-Funk as a collector and a concert goer.

I love good conversation about music so funk on, everyone!

I’m 20 from Utah and I got into the Funk Mob scene in high school because the Chili Peppers were one of the first bands I ever really vibed with, and wanting to expand my musical tastes, I started looking into some of RHCP’s influences (in this case Flea’s) which was of course the mighty Bootzilla. And of course it was only a matter of time before that lead me to the Funk Mob. I have around 50 Funk Mob albums on CD (not as impressive as vinyl, I know) but anyways, I got to see George and the band in concert last year in CA and it was awesome! I guess all I have left to say is: Funk on, U MUTHAS!!!

Hi, Im from Michigan originally. I grew up with my mom listening to the P. The funk never really hit me until i was a bit older. It was the first time listening to The electric spanking of war babies when it happened. Funk gets stronger (killer milimeter) started to play, and then it was like my mind and body started to transform. I could feel the funk corsing through my veins. My heart beating this funky beat, but always comming back on the one. And as for the rest, well, the rest is history.

5 posts were split to a new topic: Findagroov Reviews The Songs Of… George Clinton and Parliament Funkadelic

Hi all, I’m 55, been a fan since I was like 10 years old, but never got a chance to see a gig until 1989-- Aug. 19 at Cabaret Metro in Chicago. (If there’s decent audio of the complete show, I’d surely appreciate it if someone could direct me to it!) Since then, I’ve seen P-Funk probably 30-35 times. I lurked on the One Nation and Yabbers boards (RIP); glad there’s something new now, hopefully this forum will continue to grow and blossom. And this time around, I’m not gonna just lurk.

Welcome to the forum @Stonedar! I know that the August 19, 1989 show was taped, but don’t remember the sound quality. But if I’ll find it I’ll let you know!

Welcome! Glad to have you on board. I’ve seen your other posts (will respond when I can) and you seem like a very valuable member to have around!

I never did a member intro when I joined, I just dove right in. I should probably back up a few steps and introduce myself, too.

I’m pretty sure that my first p-funk song was Atomic Dog. I recall seeing it on MuchMusic in the late 90s, and it was so novel finding out that “What’s My Name” was based on an older hip-hop song. After that, it was 2008, I was working in an office and my friend that always traded CDs with me, gave me this little budget compilation with 5 Ohio Players songs and 5 Parliament songs. I thought it was pretty cool but never went any further than that.

As one who likes to broaden my musical horizons, I often sample a lot of classic artists’ best-of compilations, looking for that next obsession. Around 2013, I started making a point of buying something by every artist on Rolling Stone’s top-100 artist list. At that time, I was being pretty cheap about it and despite P-funk’s presence on the list, could not bring myself to buy 2 CDs, I wished there was just one concise, single disc compilation (can you freaking imagine that???)

By 2015 I had nearly run out of entries on that list to sample, so I finally went out and got myself Tear the Roof off, and Motor City Madness, giving me one disc of solid Parliament, and two of Funkadelic’s Westbound years. A couple months and a dozen listens later, I realized this was not enough. I changed out Tear the Roof Off for Gold (2CD), and added to the collection The Whole Funk and Nothing But the Funk 1976-1981, George Clinton’s Greatest Hits, and Bootsy’s Warner Anthology. For those keeping score, that’s 8 discs of solid p-funk. I listened to those a ton that year but never went further than that.

It was in the spring of 2019 that I really got the itch to explore p-funk further. I had been planning a massive Zappa excursion, but I ultimately decided that nothing would bring me more joy musically than to experience P-funk in full, in all its crazy glory. So I started by getting all the core Parliament, Funkadelic, Bootsy and Clinton albums. This amounted to about 78 items. The more it arrived in the mail, the more I researched, and next thing you know, I was ordering Eddie’s stuff, Bernie’s stuff, Incorporated Thang Band, US Music with Funkadelic, Axiom Funk, Parlet, Brides, Horny Horns, some live stuff that wasn’t a priority a month earlier, then most of what was recommended to me on this site. My 136th and 137th items are on their way in the mail right now.

It’s funny because aside from my p-funk obsession, I’m as sterotypically white as you can be. The funk is strong in me, nonetheless!

Favourite artists and musical families other than P-funk:

Didn’t know where else was the best place to post this… I just received Mutiny’s Aftershock 2005 in the mail, and after ripping it, I have… 2005 P-funk-related mp3s!

Curious-- Who established this forum? Who is moderator/boss?

My name is Mike. I’m 56 years old. I live in the Detroit area, but on the other side of town from where George and the crew hung out. My earliest exposure to P-Funk were the big hits as they appeared on the radio like Tear the Roof off the Sucker, Flashlight, One Nation Under a Groove and Knee Deep. I found out that Funkadelic and Parliament were one band through Robert Christgau via his column in Creem magazine. He graded each of the Parliament Funkadelic albums from the 70’s. When 8-Tracks were being phased out in the early 80’s, I managed to pick up copies of Mothership Connection and Clones of Dr. Funkenstein. on the cheap.

A guy I worked with in the mid 80s introduced me to the Westbound releases but all things P-Funk were hard to find. Money was tight anyways. I had to content my self with the tapes my friend burned.

Then came the CD revolution. I started out with Funkadelic ‎– Music For Your Mother - Funkadelic 45s, Funkadelic ‎– The Best Of Funkadelic 1976-1981 and Parliament ‎– Tear The Roof Off (1974-1980). I expanded from there. Within three years I had a core collection and them some. This is most of my P Funk collection. There’s a few strays running around somewhere. 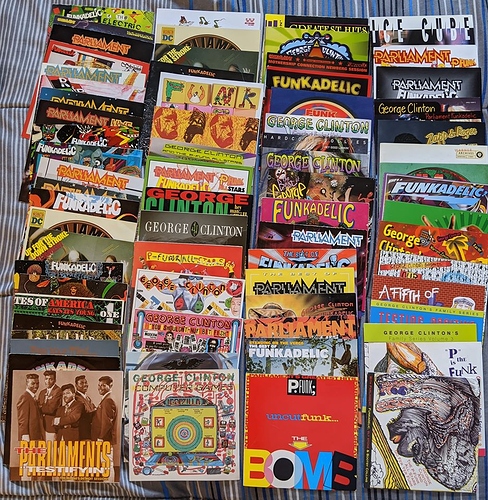 You guys just reminded I have a soundboard tape Maceo, Pee Wee and Haji Akbah from around 1990 at Dingwalls Camden Town.

Greetings fellow Clones and Funkateers. I’ve been lurking on this page for awhile and figured it was time to sign up. My name is Jay, 46, from Buffalo, NY. I was first introduced to the P back in the early 90s. A friend of mine played me some Bootsy and that’s when this Clone was born. Fun fact: I’ve had a Bootsy Collins Fan Club Funk Express Card in my wallet since the late 90s - it’s the only funkin card you’ll ever need!!

P-Funk is, by far, my favorite type of music. It definitely dominates my collection. I’ve got a ton of it, probably not as much as most, and I’m always on the lookout for more. I had a ton of CDs, ripped them all to digital (or probably illegally got some from Napster) and have circled back to physical releases by acquiring a lot on vinyl. It’s an obsession. If you’re reading this I’m sure you can relate.

I love the funk. I tell my wife that if I’m, God forbid, ever in the hospital for something major that they better play P-Funk 24-7 as funk can not only move, it can remove. She doesn’t get it. It’s nice to be around people that do. I look forward to interacting with everyone.

Hey, check out the thread about rare vinyl-only remixes. if there’s anything you can help us locate, you’d be a hero around here.

…have circled back to physical releases by acquiring a lot on vinyl. It’s an obsession. If you’re reading this I’m sure you can relate.

. Welcome to the forum!