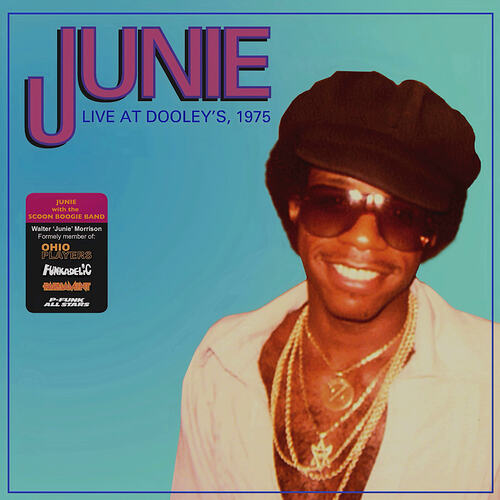 BIG DAY TODAY!!! THE ONE AND ONLY JUNIE LIVE ALBUM IS NOW DIGITAL AVAILABLE ON YOU TUBE AND SOON ON SPOTIFY A.O.

In 1975, Junie and The Scoon Boogie Band performed multiple nights at Dooley’s in Lansing, Michigan. It was during one of these nights that this live album was recorded. The show opens with “Junie II,” followed by a medley of the Ohio Players hits “Pain”, “Pleasure” and “Ecstasy”, “Cookies Will Get You”, “Pain”, “Musical Son”, “Fopp”, “Shakey Ground” and the soulful “Oh Me Oh My (I’m A Fool For You Baby)”, “Surrender”, “Suzie Super Groupie”,“Granny’s Funky Rolls Royce, “Funky Worm” and “Super J.”.

Will definitely check that out!

This is fascinating. I have always thought of Junie as a recluse. I love his solo albums, but I don’t think they were very successful, or even had much marketing behind them, so it never really occurred to me that he would have taken his show on the road. When he toured with P-Funk he blended in the background — was much less prominent than he was on the P-Funk recordings, where he was clearly a force, starting with “One Nation Under a Groove”, so it is incredible to hear him as the focal point live,

I have always wanted to hear what the Ohio Players sounded like live in the Westbound years, hearing this makes me yearn for that even more.

The show is a little rough in places and the recording has several awkward edits (several songs with fades on the end, which is always awkward on a live recording). However, there are definitely strong moments and Junie delivers as a front man, even if this does not sound like a show that was quite road worn and tested.

I hope the upcoming physical release has good liner notes, as I would love to hear the story of how these recordings came to be. I’m going to have to dig out my Junie cds and revisit the liner notes of those too…

BTW, Apple Music also has this release but it is misfiled with other artists named Junie, and not linked to the ‘Junie’ or ‘Junie Morrison’ artists which have his other recordings.

Damn. I gotta have this one. Is this the band that went on to be the Crowd Pleasers? The horns on this is out of control.

Before they went on tour with Junie, their name was already The Crowd Pleasers. Junie’s nickname was ‘Scoon’ and he coined the name ‘The Scoon Boogie Band’.

Thank you. I know I had picked up an album out the bargain bin a few years ago with a song called Freaky People on it. I’ve been trying to connect the dots air since.

Thanks for the heads up on this!