There are a few compilations with tracks credited to “Boots”. Various - Gettin' It Off • Westbound Funk Various - Get Ya Some

If you look at the Discogs images for these releases, the first two compilations claim “Boots” is Bootsy. The third doesn’t mention Bootsy at all.

The “Gettin’ It Off” compilation song is “In The Pocket”


But it’s actually “Side Saddle” by Donald Austin

Here’s the song from the “Westbound Funk” compilation, “RPM”

I couldn’t find the Boots song from the “Get Ya Some” compilation anywhere online (it’s listed on the album as “Unknown Song”).

So, is this session work Bootsy did anonymously for other artists that is now being credited to him? Are the credits legit or in error? “In The Pocket” certainly appears to be bogus…

Great observation! And good question. Don’t know if that really is Bootsy.

Found this Armen Boladian connection while I was digging around. But on the other hand, he probably had something to do with every Westbound release. So his connection is maybe not that strange, but still…

In The Pocket and that Unknown Song are both written by B Baine and L Crane. Baine/Crane are names used by Armen Boladian. The following is from page 384 in Clintons book Brothas Be… (Appendix C. Statement of Jane Peterer Thompson):

Mr. Boladian would essentially create different pseudonyms for himself so that he could derive the revenue for the musical works as an author and/or songwriter even though he was neither an actual author or songwriter. Specific examples of such false names are B. Baine, Beida Bilain, L. Crane and Louis Crane…

Boladian was also credited (among others) for Side Saddle on Donald Austins Crazy Legs album from 1973. 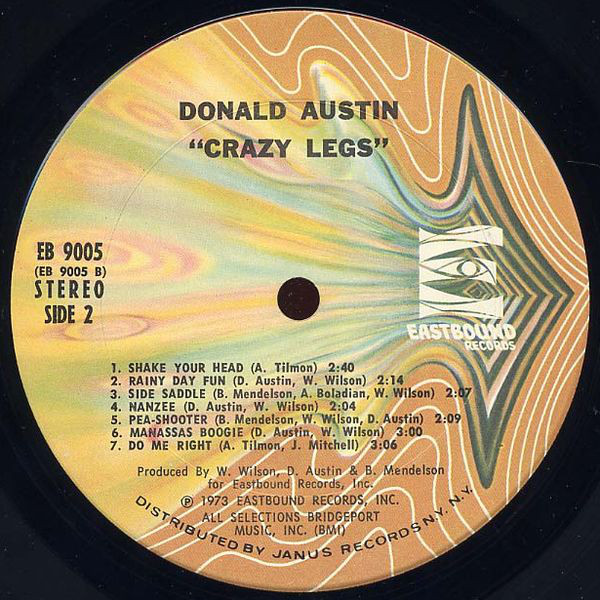 I have the Gettin’ it off compilation on CD. The liner notes written by Bill Shannon in 1993, claim that “Boots” is “non-other than Bootsy Collins” and goes on to say the “background to In the Pocket is sketchy except that it is previously unreleased and one hell of a jam.”
Don’t know much about Donald Austin, is it likely they both played on the track hence the mixed credit?

Shannon is at least partially wrong in his liner notes, because the track was not previously unreleased, it was released in 1973 on the Austin album. So if that information is garbled, it makes me wonder about the accuracy of the rest of his info, and the info on the other compilations. It’s confusing, hopefully someone knows what’s actually going on and can clarify. Does anyone have Bootsy’s ear and can ask him directly?

Looks like this supposed “In the Pocket” is just Side Saddle, as you said, and I imagine Bootsy plays bass on it. IF the liner notes are to believed.

RPM, is probably Bootsy. Being that this is Westbound and it’s full of other P-Funk material, it would make sense. I’m looking forward to finding out for sure if there’s someone closer to Bootsy who can ask him.

It’s long been rumored to be Casper but I really don’t think it is. At least not to my ears. I am in Cincy, and Bootsy is appearing this weekend to promote his beer. If I can get close to him I’ll take the disc down there and ask him. There is another comp with a “Boots” track on it. One of the Sound Of Funk series. Don’t know if it is same track.
Deeper still is the Can’t Stand The Strain instrumental. If sounds just like The Funks version with some additional guitar on it. Apparently, it’s on the other side of the Donald Austin album. I pulled it up on spotifiy. Someone sent it to me years ago but until just now I never knew where it originally came from, I’ll be damn.

‘Can’t stand the strain’ is also on the b side of Donald Austin’s eastbound 7” ‘Sex Plot’’ and yeah it does use the original Funkadelic backing track!

I’ve been trying to find out just who was this cat Donald Austin? Not much info on him.

Can’t stand the strain sounds identical to the original but with extra geetar as previously mentioned. Same drums and percussion same keyboards etc.

What’s the craic with Hot Rooster which is also credited to Eddie? Is there a funkadelic version of the song?