Just thought I’d make a reference thread for anyone who downloads this album (I got mine from Insurance Man) so that filtering through the files is an easier process for them, than it was for me.

If I call something a unique recording, it only means that if you have everything under the names Parliament/Funkadelic/George Clinton/PFAS then you would not already have this song. I can’t say for sure that these artists didn’t take these songs from their own solo albums or re-use them on future solo albums.

Bonustrack: Funkadelic: P.E. Squad / The Doo Doo Chasers (Going All-The-Way Off - Instrumental Version) - If you have a later CD release of One Nation Under a Groove, then you have this recording already.

To summarize: Unique tracks that make this set worth the download:

I haven’t given any of them a complete start-to-finish listen through, but I really like what I hear. It’s much closer to Shake the Gate than How Late, that’s for sure.

Well @Seventieslord , you just answered a question I posed over in the In Da Kar thread–

Jolene is on STG, Jolene (vrsn3) is on Version Excursion. does that mean there’s a Jolene version 2 out there somewhere?

I guess version 2 is here!

Want me to share the zip file I got from Insurance Man?

I have track 2, Fever by Sly Stone. I’m updating the OP with info.

Thanks for this - glad you put the share to good use, I’ve often wondered about which versions were different, but never got around to making the direct comparisons. Joelene I always suspected was a unique version but wasn’t sure. Still need to know more about Aqua Amor, I realised though it’s on Kendra’s “Live at Amen Ra’s” DVD which I had for a few years before Baby Makers, so that might be why it seemed familiar

: The live version is nowhere near as good though

Hi,
forgive my newby-ness…but can I ask where I can get the share
of this fine funky material ??
TIA…

Welcome to the forum Hi InsuranceMan,
and thanks for that warm welcome to the forum. Just grabbed the Baby Makers d/l. Thank you !

Back here after something of an excursion version and really chuffed to be able to share the Baby Makers d/l, so thanks muchly Insurance Man & Seventieslord, two true funkateers who are most definately on the One. dtb

Thanks for the breakdown @Seventieslord. And welcome the forum @fleegz!

Thanks for the welcome …

I’ve been reading on the Indiegogo page and it really seems like this came out on CD.

Haha reading the comments you’ve screen-capped there, it seems like it DIDN’T come out on CD and everyone’s honked about it! I bet if there was any sort of physical release, it was CD-R.

Ha! I knew someone would point that out. I only used that particular set of comments because there were multiple in there mentioning the CD. Rest assured, many others did say they received it.

The promotion on this thing must have been just awful. P-Funk has a lot more than 168 fans today, so I can only assume no one knew about it. It’s mind-boggling to think of how few hands this thing ever made it into.

I’ve been reading on the Indiegogo page and it really seems like this came out on CD.

Naw, I still believe it was a digital only release. That autographed double CD appears to have been How Late. There’s more info if you look at the Indiegogo page on a computer. 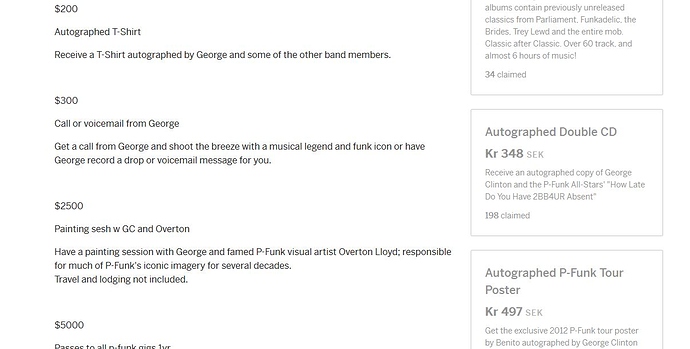 Hey, anyone care to speculate on what this is?

Also, there does not seem to be an option for a “regular” download, only a deluxe one. So I’m thinking that the one we have is the deluxe (only) version. I don’t know which of these 2 are considered outtakes and which 4 are indiegogo exclusives, though.

I’m happier knowing there aren’t any CDs floating around, because then I’d be compelled to hunt one down at all costs. As it is, my digital version is no worse than anyone elses. (phew)

Dredging this up again…

I was bored, started poking around the Indiegogo site, working my way through the updates posted by George, still there in post order from the beginning. As people donated, he released exclusive tracks to email, described by George as follows:

#3 certainly isn’t on the Baby Makers we have, which makes me think that the others aren’t either and so #4 must not be Mathematics.

I think the “Exclusive P-Funk Mystery Track” was Roller Rink, same version as on Shake the Gate

And the George Clinton & Kim Manning track is called Pushover

Hi, and thanks for the clarification on that.

Sounds like there are perhaps three unique tracks that we’ve never heard, then.

I thought I’d ask, since you knew what the exclusive mystery track was, if you had managed to obtain these songs. I know, you probably haven’t, but just in case, you know?