Did Sun Ra influence the P?

Another thing, George Clinton has never mentioned Sun Ra as an influence on the Mothership concept.
Sun Ra acted in a movie called Space is the place in 1974. Difficult not to see links, connections between the two.

I’m sorry I don’t know where I saw it but I’m fairly certain I recall George mentioning Sun Ra as an influence on at least one occasion.

If you are fairly certain without giving references, it’s a little bit hard to admit. Does he quote Sun Ra precisely on the concept of mothership. I d’ont think so. If he quotes him it would appear that it’s rather as a general influence on the band 's mythology, he won’t go further into the details. As far as I’m concerned, I red dissertations, articles, heard interviews, watched documentaries, I have never obtained such an information. These may be pure coincidences. Why not. For me when you quote or cite your source you are greater. That’s all folks. Give back to Cesar what is Cesar’s.
George is great but Ra greater as a spiritual father recognised or not.

Was Sun Ra an influence?
I didn’t even know Sun Ra when we were really doing it. I got more into him in the 90s. I knew the name and a lot of the musicians and everything, but I didn’t have a chance to look at the discography. I just thought it was way outside jazz. I knew of him, but I didn’t know his music. Then I find out years later that he had such a similar career, that he was into doo-wop in his early days in Chicago. He just appreciated all kinds of music—and he was contacted by aliens.

Welcome to the forum by the way, you’ve inspired me to give Sun Ra a blast.

yeah, I don’t have sources for George mentioning Sun Ra so you don’t have to take my word for it lol. If I remember right it was more of an off handed mention as more of a general mention, like you say. I think George said something like “we were taking stuff that people like Sun Ra and Jimi Hendrix were doing and we put our own spin on that.” idk I think it was something like that

I don’t claim to know whether George or Pedro wrote this but in the liner notes story of the Standing On The Verge album; entitled Wet Epic Debauchery, Sun Ra is mentioned as (something like…) one of the Gods’ four messengers of funk: Ra, Hendrix, Stone and Clinton. And so the epic story begins.
BTW: in the story, Ra returns to Saturn.
Probably my favorite one of those stories, though Cosmic Slop is close.

ah yes, I knew I remembered it from some liner notes or something as well!! So that’s where it was from…

Yep.
Also the source of my user name.

Bell aligned the P-Funk revolution with his own blend of Afrofuturism, to which he attributes the profound influence of Sun Ra. “The P-Funk universe was preceded by Sun Ra. Back in ’58, I went and saw a Sun Ra concert. It was pretty deep for my creative,” Bell recalls.

From an interview with Pedro which nearly broke my eyes - insane font on purple background? You mad, mad bastards.

Should anyone else want break their eyeballs

There is an article I read years ago that said, it was Bootsy who hipped GC to Sun Ra. If you listen to Electric Spanking of War Babies intro [I at the early age of 72 was abducted by aliens]. That’s all Sun Ra influence. Look at Sun Ra outfit Listen to Sun Ra talk about music. George Clinton the creative genius of all time was influenced by others such as James Brown and Sun Ra.

Ha!
I always thought the voice was saying 17.

I never knew a thing about Sun Ra until yesterday. And having done a good deal of reading and listening, I think it’s clear that yes, GC was influenced by Sun Ra a lot, particularly the overarching afrofuturism that permeated all his most important works. 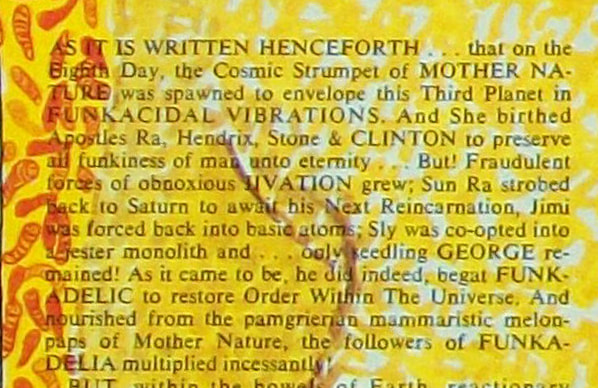 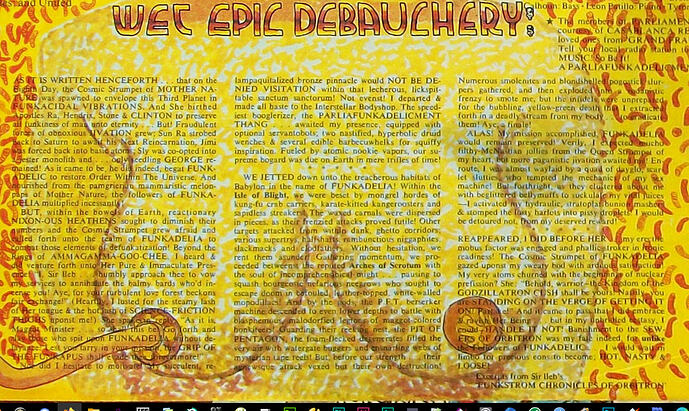