Conspiracy In The Last Time Zone

I was looking at some of George Clinton’s merch and if you follow George on social meds you’ve probably seen him wearing on of the p-funk album cover-tiled shirts. Anyways, on the merch site, their is a picture accompanying the shirt that shows a bunch of the tiled album covers (I don’t think all of them are actually on the shirt but I’m not sure). Regardless, two of the covers I had never heard of, one of which being Rocky Mountain Shakedown, which I’m of the understanding that that’s a live album, and the other being (I believe called) Conspiracy In The Last Time Zone. Which, after looking around on the interwebs a few funkateers on a forum corroborated that it had been mentioned in a documentary, but had been kept from release as it was to go on Disney’s Hollywood records and that it had been non-Disney-friendly or something of that nature. (Sorry that was a lot of context just to set up the question): does anybody know anything about this record? Does exist in some leaked form on the internet or something? Lol, one can only hope, right? It pains me to know that there might be so much good music that’s been recorded that might never be heard (Chili Peppers are a prime example. One of my favorite bands with SO MUCH leaked or B-side content that you know there must be so much more!) Oh yeah and here’s the link to the merch site https://shopvida.com/products/the-p-funk-legacy

PS: y’all are a great community I’m glad I found a couple funkateers out there who can appreciate some fresh P when they hear it. And who are willing to do an archaeological dig or two to uncover what’s up (yo, baby what’s up?!)

Amazing that you saw those two covers. Great detective skills!

Yeah The Last Time Zone… It was a Funkadelic album that was supposed to be released around 1999 on Mammoth Records (the Disney label). Some tracks ended up on How Late…, like Because/Last Time Zone and Never Ending Love. But the rest is out there! Floating around under the name The Mammoth Sessions.

There was also a cd issue of ‘Rocky Mountain Shakedown’ the track order wasn’t correct imo, I think the cd was taken from the “bootleg vinyl” which to me sounded like it was originally cut from cassette, saying that it’s still a great bootleg and example of a classic P funk concert… I think they even used one track on the 4 cd Live official box set that also contained early sugar shack “bootleg” recordings!

Awesome! Good to know, thanks.

After finally getting around to looking for the Mammoth Sessions, I can’t seem to find them anywhere. Does anybody know where I could cop those? I’d really appreciate any help.

Found the cover art for The Last Time Zone with a higher res. Pedro Bell. 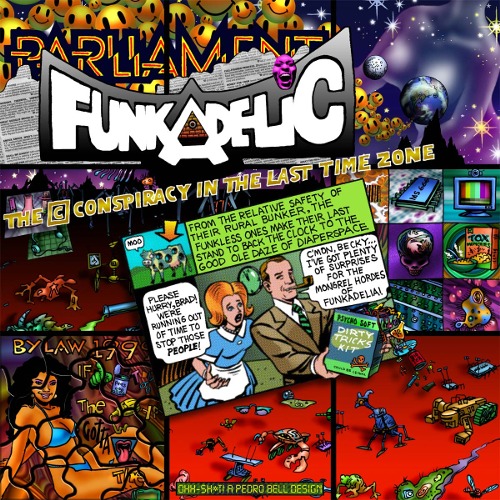 Awesome! Where’d you find that?! I was looking for a high res of that at one point!

Here’s the (presumably) WIP predecessor to that one 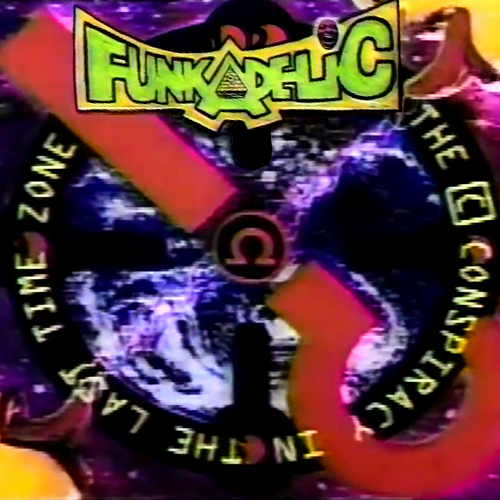 Nice! Haven’t seen that one before.

I found it in this article about Pedro Bell.

I second this. Would love to give it a listen.

It seems “the original poster” even managed to sequence all the tracks in the correct order… unlike the bootleg record/cd which has all the tracks oddly renamed and the lp sides in the wrong order.

Yeah, that track list seems to be the right one. But it’s strange that the original poster on yt wrote down the wrong track list…

Uhm! I dunno!?! As I said on the lp and the cd the bootleggers have renamed all the songs (as is often the case with bootlegs!) and then got the lp sides mixed up, but obviously anyone familiar with Live ‘P’ would be able to figure out the correct running order!?!

Yeah Last Time Zone was another enigmatic project that somehow got lost. Probably somewhere in the last time zone for real, as I recall the band went to Fiji at about that time to play into the concept I guess.

I’ve heard some of everything about exactly what prevented it from materializing. One of the more intriguing stories was Disney or somebody called in Bill Laswell to work on the tapes or something. Laswell, purportedly took one listen to it and said basically, what in the funk do you want me to do with this. Apparently it was so raggedy sounding he gave up before even starting. Don’t know how true it is.

I ran into George backstage about spring of 99. I asked him when it was coming out. He was adamant it was coming before the new year.

I ran into George backstage about spring of 99. I asked him when it was coming out. He was adamant it was coming before the new year.

We heard that before.

Haha. That’s the same thang I wanted to start telling him. Anytime he starts talking about a new album coming out? That’s when you know it’s not coming out. I’ve also noticed that in concert, whenever he starts talking to the crowd “y’all gone be here all night”, usually shortly after that he’ll wrap the gig.

Little side note fun fact. Was reading a book about Hunter S. Thompson, and he mentions returning to Denver to have to drive through the crowd from The Rocky Mountain Shakedown.

Wow I’d like to peep that one which book?

I was pretty sure it was in “The Kitchen readings - Untold stories of HST” but i skimmed through it yesterday and of course I can’t find it. If its not in that one it was in “Generation of Swine” Maybe? Its gonna bug me so I’m gonna find it!