Not saying the guy who owns the acetate is a bad guy. Just hate the thought of anything universal being locked away. Appreciate there is a legal aspect to this.

I just wanna hear I got a thing for you momma

The acetate is not of great quality. It is more important to find the mother tapes. I strongly suspect that it is stored in the Invictus archive without a label. Experience shows that this is already the case with many other tapes whose content suddenly turns out to be unique.

Thanks for the info @Funkadelic1959. Welcome to the forum!

Would love to go digging around in the Invictus dungeons, with crates of unmarked master tapes everywhere. Like Indiana Jones lookin for the holy grail.

The New York public library made a podcast/interview with George in 2014 where he mentions a black vampire. Although he talks about the original idea for the Maggot Brain cover, and not an Invictus album. Some crazy stuff.

Now if I told you what the original cover was going to look like, it was kind of nasty. But I can tell you. It was gonna be a pimp vampire, black vampire. You know, cape back, clean, fang with a diamond in it, a sparkling diamond. A glass of blood. Not biting nobody’s neck. He was too cool to bite somebody’s neck. He’d have a glass of blood with the fang, but when you look close to it, you saw a whole bunch of squeezed out tampons laying around.

haha would be cool if that photoshoot ever happened and it was put into a cd pamphlet or something at some point. The Maggot Brain artwork is just too iconic though

I know there’s no real connection between Black Vampire and Greyship Daviz? I’ve just been award of the band. I love P Funk. But Greyship Daviz are killers in their manner. Does someone know well the band ? Were the members in relation with Parliament Funkadelic when they started.
There’s obviously connections musically, but from a conceptual view, what is it about ?
There’s too little documentation available on the band on the internet.

I had to look them up. Looks like they released, like, three songs ever, not counting remixes. And it’s kinda unclear when they were recorded. Pretty funky shit though. Surprised anyone remembers a band that released three songs decades ago.

Thanks. I am waiting for your return.

Oh!! I never knew such a record was made (or totally forgot about it if I did).

Why would a label sit on something like this?? And why isn’t George fighting to get this released??!

I got news for ya, George don’t appear to care much about getting stuff like this released.

Yeah that’s true. I suppose if Invictus (or whoever owns Invictus nowadays) have the rights to the master tapes, GC wouldn’t make that much money if they got released.

Well he did not seem to be too excited over Toys as per his memoirs. I thought at some point someone was planning a nice double or triple album with the Sgt Peppers stuff on it but it seems to have sank without a trace.

Tuff City mentioned that compilation on the back cover of the Parliaments 10", “forthcoming six panel double album A New Day Begins”. That was back in 2019, so there’s still hope!

Don’t remember that he talked about Toys. Interesting. Need to go and check that in the book. But it doesn’t surprise me, since it’s Westbound and thus Armen Boladian.

I was checking out the Holland-Dozier-Holland memoirs Come And Get These Memories (by the Holland brothers). There’s almost nothing about p-funk, they don’t even mention Osmium in the Invictus chapter. But, I found this about Black Dracula! Nothing new really. But still, it’s from Eddie Holland himself. 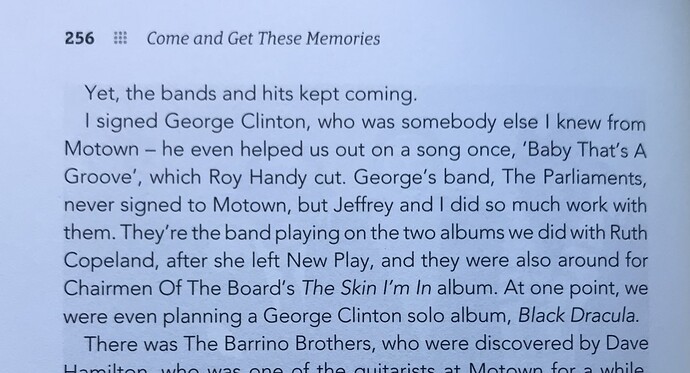 This one has always been at the top of my holy grail list. Apparently, it was featured in the Schwann Record catalogue around the time of its slated release, but I have no way of proving that since I don’t have a copy. I’d assume the Spring 1973 edition. There’s also someone on the Last.FM website with over two thousand listens of the album indexed! That’s either a P-Funk superfan or a troll with waaay too much time on their hands. Very interesting stuff surrounding this album.

Thanks guys for the extra info.

Given the crazy amount of archive albums released in the 90s and (to a lesser extent) in the 2000s, I assume George was eager to release vault stuff, but admitedly if he won’t own the masters I guess the money to make is limited, I get it.

What’s the “Sgt Peppers stuff” and “A New Day Begins”?? Never heard of those (I read George’s and Kris Needs’ book, so it may be all that stuff was mentioned in either even Black Vampire, but if it was I didn’t memorize it).

Which in the end leads me to another question: how much studio material remains unreleased. I have a few collections of studio outtakes, but is there a lot left beyond those?

Black Vampire - the 1973 Invictus solo George Clinton LP that only an acetate exists of. There’s a picture of it on Discogs but nobody has ever said they’ve heard it…

I have parts of the soundclips of this black vampire acetate. the guy who owns the acetate , he is a dj, has send me a mix of the 4 tracks. you can hear george rapping about black vampire so its a real track. its a 1 vocal and 3 instumental tracks.

Whoever it is that’s sitting on this is a dick!!