I’m currently working on a podcast about the life and musical career of Michael “Busta” Jones, some of y’all may have heard of him from his bass playing as a touring member of Talking Heads, alongside the keyboard GOAT Bernie Worrell. I’m trying to figure out more about how Bernie joined Talking Heads. In a book by the Drummer for Talking Heads’, Chris Frantz, he mentions that Bernie had never heard of Talking Heads before being asked to join the band by Busta Jones. But in other places I’ve heard that Busta had never met Bernie before joining, and that it was actually Talking Heads’ keyboardist, Jerry Harrison, who recruited Bernie. I don’t have to many sources where Bernie even talks about his time with Talking Heads, and most mention an interview in Wax Poetic, like this Rolling Stone Article, but I can’t find a copy to read online anywhere and don’t really have the cash to buy a new copy right now, so that seems like a dead end.

But I’d like to figure out how Bernie ended up in Talking Heads, and I’d figure the people on here know more than anyone about P-Funk. Does anybody know how Bernie joined the band? Or maybe know more about this Wax Poetic interview?

Thanks in advance for any help!

Hi @SlipperyDude! Bernie talks a little about Talking Heads in that Wax Poetics interview. Not much, but he mentions that it was Jerry Harrison that called him. Here’s a clipping of that part. 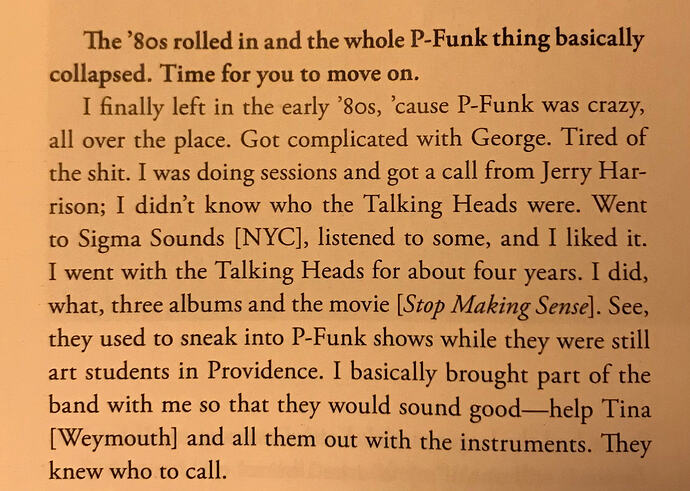 Bernie also say the same thing in this 2002 interview:

ID: You play with a lot of groups. For example, the Talking Heads. How did that come about?

WOO: Well, they heard I left P-Funk. Jerry Harrison called me up one day. They had known about us for a long time — Chris and Tina even tried to sneak into a show once. So Jerry said, would you be interested? And I said, sure, but I don’t really know who you are…

So, we met at Sigma Sound. I listened to some of their stuff. I saw how they worked. I had an idea already what they were trying to do, enlarge the group, get some black players in there. David is a genius.

Bernie had been approached by Jerry Harrison for the recording of his 1981 album ‘The Red and the Black’. It was probably Nona Hendryx who introduced Jerry to Bernie. After that, Bernie was part of the Talking Heads. In 1979 Bernie Worrell and Tyrone Lampkin collaborated on Busta Jones’ solo album, which was released on Spring Records in 1980. Bernie probably took several people to the Talking Heads including Busta and Nona Hendryx and Dolette McDonald and later also ex Brides of Funkenstein Lynn Mabry.

Alrighty, so Jerry it is! This lines up more or less with what I know, so it makes sense

Hmmm, interesting! I’m currently working on a podcast about the life and musical career of Busta, and I’ve talked a bit to Dolette, according to her and this Rolling Stone interview, it was Busta who invited her into the group, and I have some old newspaper articles that confirm Steve Scales was also asked to join the band by Busta.

I know Bernie was already touring with Talking Heads in 1980, first performing live with the band at Heatwave Festival in Canada in August of that year. That being said, I don’t know much about the recording for “The Red and the Black”, so that could’ve easily started in 1979, and Jerry would’ve been the first to meet with Bernie.

I’m very interested that you brought up Busta’s solo album, even some hardcore fans of Talking Heads don’t know he had one. Do you possibly have more information about how Busta met Tyrone? I saw Bernie’s album credit, but I mostly chocked it up to Bernie being so prolific it might’ve been by chance the 2 had worked together before Talking Heads.

Busta Jones history goes back to 1973. He can be heard on Brian Eno’s debut album ‘Here come the warm jets’ as Busta Cherry Jones. He then played on Chris Jagger’s 1974 album. He became most famous in the band ‘The Sharks’ that also included Chris Spedding. In 1978 he went from New Wave to Disco Funk with the Bombers and Gino Soccio. After a few more projects, his slo album was released in 1980. Bernie Worrell brought Tyrone Lampkin along. That same year he had a project called ‘The Escalators’ that featured both Jerry Harrison and Dolette McDonald and that’s the link to the Talking Heads. Busta JKones passed away in 1995 at just 44 years of age. To this day his solo album has never been released on CD.

Hmmm, I guess I’m still at a loss as to how Bernie knew Busta. I know Bernie was big in the scene, but I have no idea why he would play on such a small project like Busta’s album without having some sort of connection beforehand. Especially since before 1980, Busta was an outsider to the New York scene, like you said, he had been playing in Canadian bands for several years by that point. So why would Bernie work with Busta, especially since this was before the 2 of them shared the stage with Talking Heads?

I’m not entirely sure when in 1980 the Escalators EP came out, but I also know that same year Busta and Jerry also worked on a project called Double, with Jerry playing keys on the an album Busta produced alongside his Bombers friends, like Walter Rossi. Which sort of muddies the water in terms of did Jerry meet Busta and ask him to join Escalators, or did Busta meet Jerry and ask him to work on Double?

Good news about Busta’s album though, while I couldn’t track down any master tapes, I was able to rip my vinyl copy and upload it to YouTube, which you can find here! https://www.youtube.com/watch?v=yINsO70oDPY&t=1492s

Maybe you could get some info from Judie Worrell (Bernie’s wife). You can find her over at fb.

You probably know this but, it was fun so what the hey…

Nona is all over Remain in Light (great album btw) released Oct 1980. Bernie and Busta show up on the live album The Name of this band is Talking Heads.

‘The second LP comes from the Remain in Light tour, recorded in 1980 and 1981. In order to present something close to the music on that album, the original quartet lineup was greatly expanded. Added were two percussionists (Steven Stanley, Jose Rossy), two backup singers (Nona Hendryx, Dollette McDonald), Busta Cherry Jones on bass, Bernie Worrell (!) on keys, and a young Adrian Belew on lead guitar’ (their exclamation mark after Bernie’s name- indeed).

Bernie gets one credit for Girl Friend is Better off Speaking in Tongues - great track, deadly album. He’s also all over Stop Making Sense - great film, great concert, great album- as is Lynn Mabry, but Bernie steals the show for me, years before I knew who he was.

Now, this is the interesting bit: Busta appears to be bass guitar on a number of songs off More Songs About Buildings and Food, which is their second album and came out in July 1978.

This is the first album Brian Eno collaborated with Talking Heads so I gotta think it was Eno brought him in.

*He worked with Eno in the early 70s - his band supported Roxy Music - and appeared on Brian Eno’s first solo album. He also played on Byrne and Eno’s album My Life In the Bush of Ghosts in 81.

Unusually, Wiki has loads of information although they don’t have him on Songs About Buildings

Hey man, thanks for replying, yeah all this music kicks ass!

You mentioned a few points that i havent seem before so i was wondering if you could elaborate a bit. Not saying anything is wrong or right, just that i havent heard this info before.

You mention 2 percussionists, Steven Stanley and Jose Rossy and that they performed live with Talking Heads. From my research Steven Stanley was more a producer/engineer for Remain in Light and then later Tom Tom Club. Jose Rossy played in the studio with Talking Heads, but then only live with Tom Tom Club. The additional percussionist for the Remain in Light and then later Soeaking in Tongues tours were Steve Scales, but please correct me if im wrong.

I cant seem to find anything saying Busta performed bass on More Songs about Buildings and Food, again not saying he didnt. Busta had already worked with producer Brian Eno several times by this point, so the connections there, but from my understanding, Talking Heads had already written a majority of the songs off More Songs back when the band was still a 3 piece, and that bassist Tina Weymouth wrote and performed bass for that album.

Do you possibly have sources where you found this info? Id love to read em! Thanks

None of em trustworthy I would say. And seem contradictory in places. 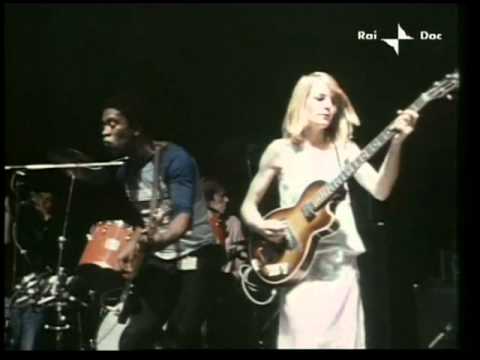 Peoplepill.com - like the name of the site if nothing else

In 1979, Jones became involved with various projects surrounding Talking Heads. He contributed to the David Byrne-Brian Eno collaboration My Life in the Bush of Ghosts (recorded in 1979 but released in 1981) and earned a co-songwriting credit (along with Byrne and Eno) for the song “Regiment”. He was also hired to coach Talking Heads bass player Tina Weymouthin additional funk techniques. Jones was then hired to play additional bass and rhythm guitar (alternating with Byrne, Weymouth and Jerry Harrison) on Talking Heads’ Remain in Light tour, which was later documented on the latter half of the 1982 double live album The Name of This Band Is Talking Heads and an oft-bootlegged concert film shot in Rome during 1980. Due to friction with Weymouth, Jones’ association with the group was short-lived.

Later on, Jones was associated with other new wave and/or punk bands, including Gang of Four (he briefly replaced Dave Allen in the band) and The Ramones (Jones co-wrote the song “Chasing the Night” off the Too Tough to Die record, with Joey Ramone and Dee Dee Ramone).

Other artists Jones worked with included Chris Spedding (1981’s Friday the 13th and 1991’s Just Plug Him In!), Robert Fripp(1980’s God Save the Queen/Under Heavy Manners) and Brian Eno (1974’s Here Come The Warm Jets), among others.